Hyundai is adding Plug-in Hybrid and N Line models to its 2022 Tucson line-up. Tucson N Line and Plug-in Hybrid SUV models will be produced in Ulsan, Korea and be available spring and summer, respectively. Hyundai had already announced a hybrid version of the 2022 Tucson. 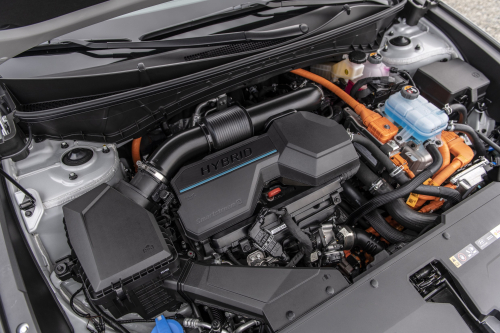 Plug-in Hybrid Level-II charging capability is well under two hours to recharge the system using a 7.2kW on-board charger. The Plug-in Hybrid powerplant delivers power through a PHEV-tuned six-speed automatic transmission for smoothness and efficiency, with an estimated combined fuel economy rating of 30 mpg with all-wheel drive. The Plug-in Hybrid even offers a tow rating of 2,000 lbs.

HTRAC AWD in a plug-in hybrid SUV. Along with the new 2022 Santa Fe Hybrids, Tucson Hybrid and Plug-in Hybrid models will also offer our standard mechanical HTRAC AWD capability to meet the needs of eco-focused buyers with specialized modes for greater adaptability to terrain and weather conditions, including Snow mode.

Hyundai’s latest HTRAC all-wheel drive systems for the hybrid and plug-in hybrid have been tuned at off-road proving grounds to maximize forward traction capability over a wide variety of surfaces.

e-Handling Driving Dynamics. The driving performance goal for the Tucson was to create a more pure sense of connection between the vehicle and the driver. Driving dynamics match the sporty exterior design, and the handling package is improved, so the new Tucson is even more agile than the previous generation. The suspension has been refined in conjunction with e-handling systems to minimize traditional compromises between sporty handling and superb ride comfort.

As a Tucson hybrid model turns-in to a corner, the electric motor system applies precise incremental braking force to the front wheels, increasing their tire contact patch on the road surface for enhanced traction and steering response while initiating turn-in. Then, as the vehicle moves to exit the corner, the electric motor applies precise torque to the rear axle, increasing the rear tire contact patches for enhanced traction and control accelerating out of the corner.

N Line. As part of Hyundai’s growing N brand, Hyundai developed an N Line version of the Tucson to appeal to enthusiast buyers, with a more aggressive exterior and interior appearance.

PHEV. The best of both worlds for me. Cheaper thanEV. Home/solar charging for local miles. Gas infrastructure for road trips.