Partial suspension of two Nornickel mines to reduce 2021 production of nickel by 35 kt, copper by 65 kt and PGM by 22t

Russia-based Nornickel, the world’s largest producer of palladium and high-grade nickel and a major producer of platinum and copper, estimates an approximate drop of 35kt of nickel production, 65 kt of copper production and 22 t of platinum group metal (PGM) production in 2021 after operations at two of its mines were partially suspended following groundwater inflow.

On 12 February, during tunnelling operations, natural groundwater inflow was detected at the 350 meters depth mark in the mine headwall at Oktyabrsky mine. Due to the increased water inflow to the drainage systems of the mine and in accordance with safety procedures and applicable law, the company partially suspended operations at the mine.

Partial suspension of the Oktyabrsky mine was required as a preventive measure to ensure the safety of our employees. Operations at the Taimyrsky mine have also been partially suspended, since there are connected underground workings between the two mines, and water has found its way into this mine’s horizon. 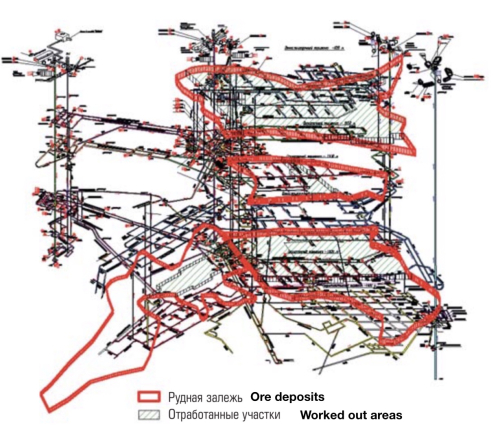 Axonometric diagram of the Taimyrsky mine in 2015. From Bylkov and Leonov (2015)

The company’s Norilsk Division has developed a plan, with the base case scenario implying that the Oktyabrsky mine (5.0 Mtpa of ore) will gradually ramp-up in the second half of April — May. The Taimyrsky mine (4.3 Mtpa of ore) is scheduled to resume mining in early June, with a full recovery expected to take approximately one month following that.

The plan to stop the inflow of groundwaters has been split into several phases:

The process of blocking water inflow is complicated by its high intensity and the geological conditions at the locations of the cofferdams’ installation. Currently, the Norilsk Division management is operating under the base case scenario. Nevertheless, due to the outlined circumstances, the risk of an additional delay in the implementation of this plan cannot be completely ruled out, the company said.

At Norilsk Concentrator, the disseminated ore processing circuit (5.2 Mtpa ore throughput) has been idled and repairs are being carried out. The circuit is scheduled to be ready for re-start by 15 April. At the same time, the concentrator is currently being inspected by the Federal Service for Environmental, Technological and Nuclear Supervision (Rostekhnadzor) and the company’s internal auditors. The exact timing of the restart will be decided based on the results of these inspections.

The Norilsk Concentrator’s copper circuit (4 Mtpa of ore throughput) resumed operations on 15 March after a temporary shutdown for technical inspections and repairs. During the downtime, the Zapolyarny mine (the South Cluster project) continued mining.

Impact. Roskill notes that is the most significant disruption to hit the copper market so far in 2021. Nornickel is also the world’s largest high-grade nickel producer, accounting for 26% of global Class I nickel production and 9% of total global production in 2020. Last year combined sales of nickel and copper contributed 42% of the group’s total metal revenue. The disruption at the two mines will lower the projected output for copper and nickel by 16% in 2021.

The reduction in output volumes will be in addition to an anticipated drop in nickel and copper production through 2022. The year-on-year decrease in guidance (2% for nickel and 7% for copper) is a consequence of furnace maintenance and secondary feedstock depletion. The Taimyrsky and Oktyabrsky mines are also part of a long-term development plan to increase the mine life of the Talnakh deposit.