Novel pathway for aviation fuel from food waste–derived volatile fatty acids (VFA) could lead to 70% blends, up to 165% reduction in GHG

Researchers from the National Renewable Energy Laboratory (NREL), the University of Dayton, Yale University, and Oak Ridge National Laboratory have demonstrated the production of sustainable aviation fuels (SAF) from food waste–derived volatile fatty acids (VFA) by targeting normal paraffins for a near-term path to market and branched isoparaffins to increase the renewable content in the long term.

In an open-access paper published in Proceedings of the National Academy of Sciences (PNAS), they report that combining these distinct paraffin structures synergistically improved VFA-SAF flash point and viscosity to increase the renewable blend limit to 70%. Life cycle analysis showed up to 165% reduction in greenhouse gas emissions relative to fossil jet if the food waste is diverted from landfills to produce VFA-SAF.

Wet waste is a low-cost, prevalent feedstock with the energy potential to displace over 20% of US jet fuel consumption; however, its complexity and high moisture typically relegates its use to methane production from anaerobic digestion. To overcome this, methanogenesis can be arrested during fermentation to instead produce C2 to C8 volatile fatty acids (VFA) for catalytic upgrading to SAF.

Here, we evaluate the catalytic conversion of food waste–derived VFAs to produce n-paraffin SAF for near-term use as a 10 vol% blend for ASTM “Fast Track” qualification and produce a highly branched, isoparaffin VFA-SAF to increase the renewable blend limit.

In the process, anaerobic digestion of west waste is arrested prior to methanogensis to generate VFAs (C3-C8). Ketonization then elongates the carbon backbone of VFAs (C5-C15); ketonization reacts two VFAs to produce a single ketone that is one carbon shorter than the sum of both acids and removes oxygen in the form of water and carbon dioxide.

The impressive emissions reductions of the VFA-SAF are achievable by targeting the huge greenhouse gas footprint of food waste. Every year, millions of tons of food waste are hauled to landfills across the country. Once there, it rots and produces methane, a greenhouse gas more than 20 times more potent than carbon dioxide. Eliminating food waste as a source of methane, then, can be a highly effective way at driving down landfill emissions.

It can also be effective at producing fuel. Previous research showed how to interrupt methane generation with fermenters that transform the carbon energy of food waste and other organic wet waste into volatile fatty acids (VFAs), which can be upgraded into jet fuel. But those studies, while proving that SAF from wet waste is possible, did not document how such fuel could meet ASTM International’s fuel property requirements.

Meeting ASTM standards is mandatory for the use and deployment of new SAF by industry. Our paper shows we can make drop-in SAF that meets those standards, with analysis that reveals how to refine VFAs so airlines can utilize large amounts of VFA-SAF without sacrificing performance.

Using a catalyst to add more carbon to VFA molecules, Vardon and the other scientists showed how to build long strings of energy-rich paraffin hydrocarbons that are essentially chemically identical to those in conventional jet fuel—except with a fraction of the carbon footprint. 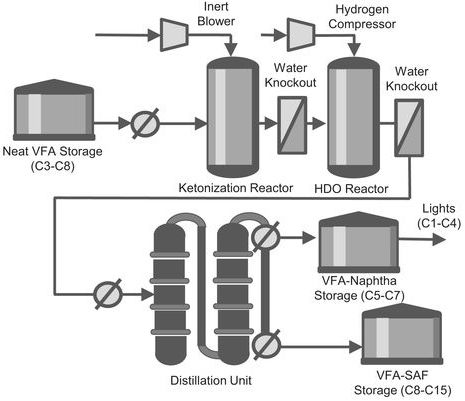 If our refining pathway is scaled up, it could take as little as a year or two for airlines like Southwest to get the fuel regulatory approvals they need to start using wet waste SAF in commercial flights. That means net-zero-carbon flights are on the horizon earlier than some might have thought.