Mercedes-Benz has started producing high-performance batteries for its all-electric luxury EQS at its Stuttgart-Hedelfingen plant, as part of the Untertürkheim location in Germany, ahead of the sedan’s world premiere on 15 April 2021.

The EQS marks the start of a new generation of high-performance electric vehicles and will offer a range of more than 700 km (435 miles) based on WLTP, using a high-efficiency powertrain and advances in battery energy density. Having integrated battery production seamlessly alongside existing transmission production, the Hedelfingen plant has been transformed into an important part of the company’s global battery production network.

The quick ramp-up of its global battery production capacities and targeted expansion of battery competencies through the entire value chain are the key pillars of Mercedes-Benz electric initiative—from basic research, cell production up to batteries’ afterlife including second-life applications and recycling.

This in-house know-how and vertical integration is key for playing a leading role in electric vehicles. In addition to scaling up the EQS battery production, the Mercedes-Benz Drive Systems Campus Untertürkheim will specifically expand its research and development activities in the field of e-mobility through a campus for electric and electrified drive systems as announced earlier this month.

High-performance battery systems made in Stuttgart-Hedelfingen. The Hedelfingen plant, as part of the Mercedes-Benz Untertürkheim location is responsible for the production of battery systems for the Mercedes-Benz EQS, as well as the upcoming EQE. The plant has a production and logistics area of about 16,500 m², relying on state-of-the-art systems including a wide range of Industry 4.0 technologies.

The highly complex lithium-ion battery system is produced on an approximately 300 meter production line with more than 70 production stations and with a high number of automated as well as manual steps. A variety of components including up to 12 cell modules and the EE-compartment for the intelligent integration of power electronics make up the EQS battery system. The EE-compartment is assembled by the Mercedes-Benz Berlin site. 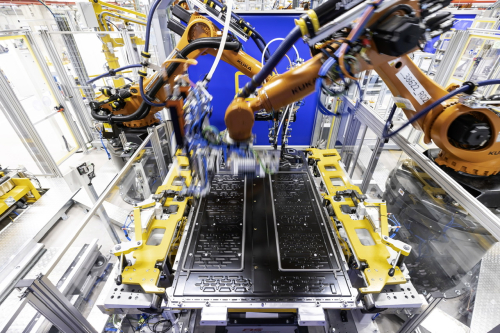 The EQS will be equipped with battery layouts enabling different range and performance variants. With an installed energy content of up to 108 kWh, the EQS targets, according to WLTP a range of more than 700 kilometers, aided by best-in-class aerodynamics. The in-house-developed software technologically enables updates over the air (OTA), ensuring that the energy management of the EQS will remain up-to-date over the entire lifetime of the vehicle. Besides its CO2-neutrally produced cells, the EQS battery cell chemistry includes nickel, cobalt and manganese in a ratio of 8: 1: 1, cutting the cobalt content to around ten percent.

Targeted extension of in-house EV expertise focusing battery cells. With the bundling and extension of its battery activities at the Mercedes-Benz Drive Systems Campus at the Untertürkheim site (Germany) the company strengthens its expertise in the field of e-mobility. Research and development activities are already anchored at the location, such as the e-technology center and cell technology center, where, among other things, prototypes for the electric drive system are built and cell technologies are researched and tested. The findings from the company’s international research hubs will be centralized at this location.

In order to deepen its competence as a center for battery technology, a new factory for the small-series production of future lithium-ion battery cells is being planned, starting its operations in 2023. The sustainability factor, transparent cell development through to recyclability, plays a major role in this. The focus on in-house know-how and high vertical integration is key for a leading role in electric vehicles. Mercedes-Benz plans to invest a three-digit million amount in the transformation of the site.

No mention of making their own cells.
They are going to struggle.

bman:
Good Point; Vertical Integration for BEV makers is almost a must when we reference their key component...batteries.
Again, what we need to get rid of dirty ICEs is affordable BEVs for the middle class, not more overpriced EV sports vehicles.

When the volume and margins are there you go vertical.

Mercedes is a part of the EMBATT Battery consortium so I could imagine that they are drawing their batteries from EMBATT.

Ultimately a strong alternative to lithium battery is needed. future battery has to be much chieper and easy to produce to usher in mass small electric vehicles.