Nauticol Energy and Enhance Energy have entered into an agreement to work collaboratively for the capture and sequestration of up to one million tonnes of CO2 each year from Nauticol’s planned $2-billion Blue Methanol facility to be built near Grande Prairie, Alberta. Utilizing Western Canadian natural gas, combined with carbon capture and sequestration, the project will produce 3 million tonnes annually of net-zero, Blue Methanol.

Nauticol’s Grande Prairie facility is located in the heart of the prolific natural gas and liquid hydrocarbon formation called the Montney. This world-class resource covers around 130,000 square kilometers and spans about 700 kilometers from northeastern British Columbia to northwestern Alberta. By 2040, the Montney is projected to produce over half of Canada’s natural gas.

Nauticol has partnered with Haldor Topsøe, a company with extensive experience and best-in-class technology that is commercially viable, proven, reliable and used world-wide. The technology is designed to deliver ease of operation, reduced downtime and maximum energy efficiency.

Our plant design was already targeted to be a global leader in low emissions. Partnering with Enhance on CO2 capture and sequestration changes the game of what low carbon methanol production at world scale will be from this point on. 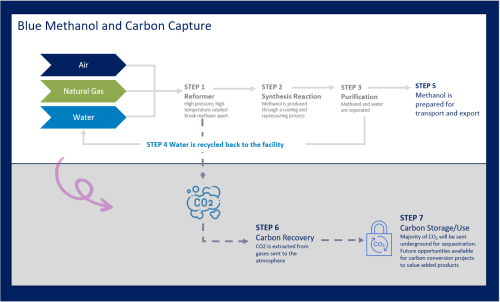 Blue Methanol produced using CCS is an integrated solution that involves capturing and compressing waste CO2 at the plant site and injecting it deep into contained geological formations where it is permanently and safely sequestered. Nauticol will be responsible for capturing the CO2 and Enhance will manage the development, construction, and operation of the CO2 sequestration system beyond the plant site.

I don't understand the math.

It's called greenwashing math; but, they can't get around the fact that burning methanol is still pollution.

Yes, the CO2 sequestration at the well head seems to be a diversion of attention. Burning 3m tonnes of CH3OH derived from methane will produce over 4m tonnes CO2 that is fossil fuel derived and not sequestered. Of course it could be used for chemical production ( to e.g. vinyl acetate via acetic acid) rather than burned.

I've had a look round to try to see what Haldor Topsoe are talking about, as they are a highly respected name with leading technology.

I have not managed to nail it down, but I have got a lot nearer their figures.

' Ten or more years ago, a typical methanol manufacturing plant would emit about 0.9—1.0 metric tonnes of carbon dioxide for every ton of methanol produced. In addition to the environmental concerns, large CO2 emissions represent operational inefficiencies in a methanol plant, since the carbon emitted as CO2 is not available for making methanol molecules. In fact, excess CO2 from other industrial facilities can also be captured and consumed to increase methanol production. Through the implementation of efficiency improvements and through replacing of older facilities with newer plants that use more efficient technologies, over the last decade methanol plants have been able to significantly reduce CO2 emissions by up to 40%. Some facilities report emissions as low as 0.54 tonnes of CO2 / tonne of methanol produced. This is equivalent to emitting 3.8 lbs of CO2 per gallon of methanol.'

So that is down to around 1.5MT of carbon dioxide for 3MT of methanol.

Some improvements over that, perhaps using electricity from renewables for some of the heating as Haldor Topsoe do for syngas production:

And we are at the 1MT they will sequester.

Spent NG fields have the pipes, they are stranded assets.