With the conclusion of Phase 2 of the project, the Triumph TE-1 partners—Triumph Motorcycles, Williams Advanced Engineering, Integral Powertrain Ltd, and WMG at the University of Warwic—have revealed the battery, powertrain, and design sketches for the electric motorcycle concept. The project is funded by the UK Government’s Office for Zero Emission Vehicles (OZEV), delivered through Innovate UK.

Key project achievements to date include test results that show significant innovation in mass, battery technology, and powertrain performance that exceeds the target set by the UK Automotive Council for 2025, meeting the project’s ambitious objectives to deliver genuine innovation for a new standard in fully usable electric motorcycle performance.

Battery and powertrain prototype. Based on the agreed specification, Williams Advanced Engineering (WAE) identified appropriate cell technology and battery architecture to deliver the performance objectives. Using this as a framework, it then optimiszed the battery module layout to balance mass and positioning within the prototype chassis taking into consideration center of gravity, space and relationship with the powertrain and charging approach.

In addition to the module layout, WAE also developed a new and unique vehicle control unit which is integrated into the battery pack to minimize weight and packaging.

In parallel, WAE has also created innovative battery management software to ensure power is delivered in relationship to battery performance.

The outcome of Phase 2 for WAE includes a fully bench-tested battery with performance results that exceeds anything else on the market in terms of Power and Energy Density. 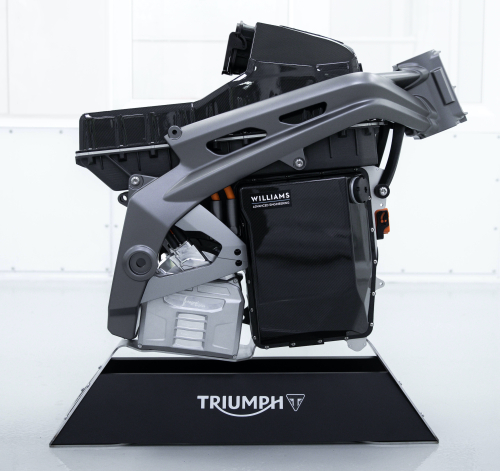 The battery has peak power of 170 kW and continuous power of 90 kW, with a capacity of 15 kWh. This enables the motorbike to deliver 130 kW of peak power and 80kW of continuous power. Class leading system cooling combined with the optimum balance of power and energy means TE-1 can give the rider more electric power for longer and deliver outstanding performance regardless of battery charge. The 360-volt system also enables a fast-charging time of under 20 minutes (0-80%), which is combined with a market-leading target range.

Through this innovative project, we are delivering next-generation battery technology. The energy density of this new battery will be a significant step forward giving the rider more power, for longer. And whereas existing technology limits performance at low levels of charge, our lightweight, compact solution gives the rider all of the performance all of the time—regardless of battery charge. It also delivers class-leading range.

Additionally, we have pushed the limits of performance by balancing the battery for acceleration and range, with simulations modelled on track-based riding. In other words, as aggressive as possible. WAE has also designed and developed a bespoke electronic control unit combining the battery management system with the bike control functions in one package. A first for this market, this benefits packaging and integration whilst optimizing performance and range. What’s more, we have also reduced mass and optimized frame position to benefit handling too.

WAE was the original supplier of batteries to the entire grid of FIA Formula E World Championship cars in 2014, a relationship that has been revived for 2022-23 season with WAE being awarded the exclusive contract to supply the Gen3 battery system. WAE also supplies battery systems to ETCR and Extreme-E.

Integral Powertrain. In Phase 1 Integral worked to integrate the normally separate motor and inverter into one single, compact, package. Integration reduces the mass and volume of the drivetrain by reducing additional boxes on the vehicle, mounting features, coolant pipework and heavy high voltage connections.

The innovative integration concept is also a fully scalable one, whereby the number of power stages can increase for larger diameter, higher torque motors for example.

Integral’s motor has achieved a power density twice that of the target set by the UK Automotive Council for 2025.

At the end of Phase 2, Integral has built a fully operational, new, prototype motor that has been bench-tested and is delivering on all aspects of performance.

The motor produces 130kW or almost 180 horsepower, but weighs only 10 kilograms, much lighter than existing technology and clearly a small fraction of the mass of traditional internal combustion engines, said Andrew Cross, Chief Technical Officer at Integral Powertrain Ltd. 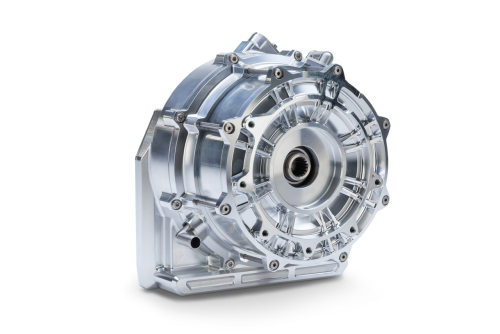 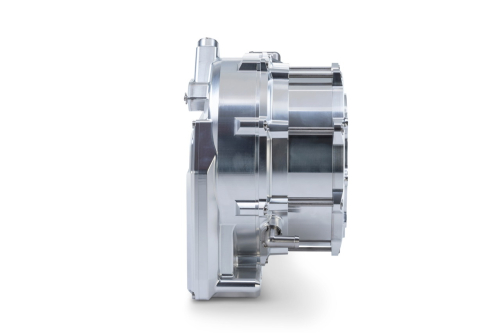 WMG, at the University of Warwick. WMG worked closely with all the TE-1 partners during Phase 1 and 2 to develop representative models to simulate the systems of the bike including battery, motor and vehicle control.

Initially this allowed the validation of the specification against the intended component selection by assessing performance criteria such as range and top speed with initial models. This has enabled Triumph to carry out software development at an early stage prior to hardware being built with thorough testing programs to ensure that real-life testing can deliver on refinement.

Most recently, WMG has been conducting powertrain rig testing using the prototype IPT powertrain to ensure the simulations are accurate and to confirm that the motor functions within the system as intended. WMG has also been providing guidance to Triumph relating to future legislation, charging infrastructure and recycling strategies that will need to be implemented across future electric motorcycle platforms. 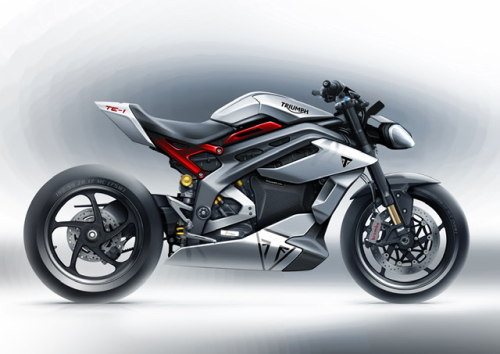 Triumph Motorcycles. Throughout phase 2 Triumph developed a new advanced vehicle control software which incorporates all of the electrical systems to ensure intuitive throttle response, regen braking, traction control and all of the dimensions that a customer would expect from a high-performance Triumph motorcycle.

Additionally, it integrated leading functional safety strategies into this software, plus it supported WMG in rig testing and have also fully developed the new prototype instrument display.

Alongside this electrical and control system work, Triumph designed a new prototype chassis including main frame and rear frame which have been optimized alongside the battery and motor packages which will be further evolved in Phase 3 into the TE-1 Prototype which will be used as a mule test platform in Phase 4.

During this chassis development Triumph took into account both the transmission design and the final styling of the TE-1 Prototype.

I'm dubious about the commercial prospects. I suspect that a healthy chunk of NVH is considered a crucial feature, not a bug, to most motorcycle enthusiasts.