Since July 2019, the purely battery-electric Mercedes-Benz eActros has proven its worth in extensive field testing at the company Logistik Schmitt. The eActros has travelled a total of around 50,000 kilometers in the Northern Black Forest to date, carrying more than 100,000 load units on around 5,000 trips. In doing so, it has transported around 30,000 tonnes of freight. The eActros’ operation at Logistik Schmitt has therefore proven that a battery-electric truck can perform the same tasks as a conventional diesel vehicle. 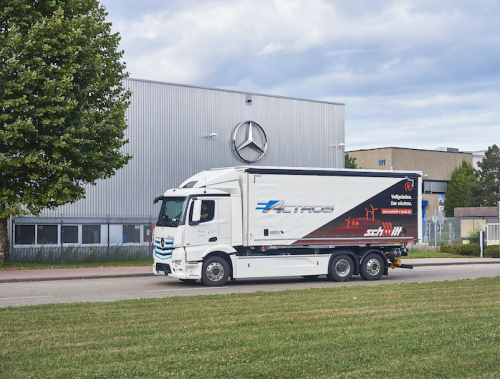 Daimler will now compare the performance of the battery-electric eActros with trucks participating in the eWayBW catenary project. Daimler has no plans for catenary trucks. Series production of the eActros is planned to begin at the Wörth plant this year.

eWayBW is a pilot project for the research of electrically operated hybrid overhead contact (catenary) line trucks. On a selected public test track on the B 462 between Kuppenheim and Gernsbach-Obertsrot, two sections with overhead lines are electrified.

Logistik Schmitt has, since January 2021, also been using the eActros on a new route along the B462 main road—which largely corresponds to the eWayBW catenary route. The eActros was originally not planned to begin traveling along this route until mid-2021, when a further-developed variant of the electric truck will be used for this purpose.

However, the experts at Mercedes-Benz want to take advantage of this opportunity to also test the current prototype in detail here. Because the eActros is powered solely by batteries, it can very flexibly accommodate route changes at short notice.

Between 250 and 300 kilometers must now be covered each day—more than 100 kilometers more than was previously the case. While the eActros has generally transported a load weight of approximately four tonnes on the previous route, it usually transports a far heavier load on the new one. The operation of the eActros on the new route represents an initial step towards the concept comparison with eWayBW.

During the direct comparison, the eActros, like the eWayBW trucks, will transport rolls of paper along an approximately 18km route from the paper mills in Gernsbach-Obertsrot to the logistics center of the Fahrner company in Kuppenheim.

Mercedes-Benz Trucks plans to hand over the enhanced, near-series prototype of the eActros to Logistik Schmitt this summer.

We are focusing our development activities on the two all-electric drive technologies that are genuinely locally CO2-neutral: batteries and hydrogen-based fuel-cells. They enable us to meet every one of our customers’ use cases very flexibly with regard to routes. Our field testing of the eActros shows that the battery-electric truck is optimally suited to heavy-duty urban distribution. For use cases that require longer ranges and loads, we plan to include the eActros LongHaul, which is also purely battery-electric, in our portfolio of series products beginning in 2024.

For even more demanding applications, we want to add series-produced long-haul trucks equipped with hydrogen-based fuel-cell drive systems to our product range in the second half of this decade. For our test project in the Northern Black Forest, the battery-electric drive has proven to be the right solution.

I like their mix and match approach.
People who get really theoretical and try to lay down the law 'from first principles' in my view have a very inflated view of how much it is possible to know.

Top down doesn't work, let's try batteries, and fuel cells and catenaries depending on the route and the application.

I can see them all being useful and contributing.

Running power to more lightly used routes may never be economic, so options are good.