The California Energy Commission has awarded GTI and Sierra Northern Railway nearly $4,000,000 to fund the design, integration, and demonstration of a hydrogen fuel cell switching locomotive to support the Hydrogen Fuel Cell Demonstrations in Rail and Marine Applications at Ports (H2RAM) initiative. The locomotive will show the potential of hydrogen fuel-cell technology to reduce transportation air pollutant and greenhouse gas (GHG) emissions. 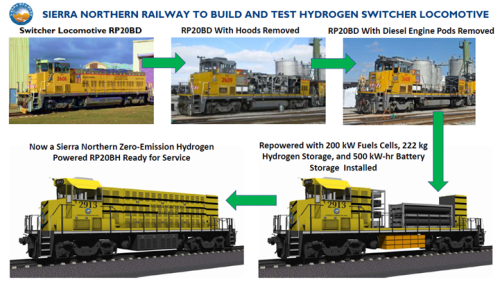 The funds will be used to retire a Tier 0 diesel locomotive and to replace it with a zero-emission switching locomotive using advanced hydrogen technology. The project involves the integration of advanced hydrogen fuel cell, hydrogen storage, advanced battery and systems control technologies to provide an alternative to less environmentally friendly diesel-powered locomotives. The demonstration will facilitate the improvement of local air quality, a reduction in greenhouse gas emissions, noise and odor.

The overall project goals and objectives are:

Demonstration and validation of this technology will establish a platform for widespread commercialization in the immediate future. Because locomotives are federally regulated, incentivizing railroads to implement new environmental technologies is challenging. The potential California market for new hydrogen locomotives includes more than 260 switcher locomotives and up to 500 intrastate locomotives.

Short-line and switching locomotives account for a significant share of the total locomotive energy use within the state as they carry a significant portion of freight in California and operate on the first and last miles of the national freight network. This makes short-line operations an excellent testbed for the demonstration of zero-emission technologies.

Most switcher locomotives in California use an average of 50,000 gallons per year per switcher potentially leading to a reduction of more than 12 million gallons of diesel per year. This is approximately equivalent to the same amount of fuel used each year by 20,000 light-duty vehicles.

The rail sector and goods movement in ports are challenging applications for low-carbon energy because they often require near-continuous operation and high power levels. This project directly addresses those issues as we seek to advance technologies that can enable ports as high-throughput clusters for affordable, low-carbon hydrogen and achieve scaled demand across multiple applications.

Sierra Northern Railway currently operates approximately 75 miles of track in Northern California, through the heart of a number of California’s prime industrial areas, serving a wide variety of customers, and interchanging with both the Burlington Northern Santa Fe Railway and the Union Pacific Railroad.

I thought switching and shunting were two applications where batteries tend to come out ahead.

I assume that they must have limited down time for recharging, in which case going to fuel cells makes sense.

That is why FC fork lift trucks have caught on in many warehouses.

@Davemart - we had a substantial fleet of electric forklifts even back in the '90s. Most of them were a giant lead acid batteries with a fork lift attached. They had cranes and would switch battery packs if one died mid-shift, other wise they just parked them next to chargers. It's one application where weight is a benefit, not a liability.

Of course we also had equal amount of dual fuel that ran mostly propane. They ran the outside jobs while the electrics ran the inside jobs (mostly)

This study describes Total Cost of Ownership (TCO) of fuel cells is more favorable for yard switchers than freights and regionals. In addition, like FC Fork Lift trucks, infrastructure is less of a problem.
https://www.energy.gov/sites/prod/files/2019/04/f62/fcto-h2-at-rail-workshop-2019-ahluwalia.pdf

BNSF Railroad tried this back in 2008 and decided not to continue to run it after a year or so. I am not sure what happened to locomotive after they stopped running it but it is still intact, Sierra Northern Railway could just borrow it and run it until they also decide it is not worth the hassle. The write up is a bit confusing as they claim that they are replacing a Tier 0 locomotive. However, the locomotive that they are rebuilding is probably at least Tier 3 as it was originally rebuilt to use 2 or 3 smaller diesel GenSets where the the locomotive could run at low power with just one engine.

I would like to see them use hydrogen where it makes sense. Perhaps this trial will prove the points that many believe; that hydrogen is too costly and gas is too dirty.

Interesting data in the analysis you have linked, gryf

The case in Europe seems much more favourable for many applications:

I don't fancy running through to do a line by line analysis to find out where they differ, but a cursory glance here:

' The total cost of ownership (TCO) of FCH trains remain higher than the diesel technology in a base case scenario, despite lower maintenance costs compared to diesel powered trains. However, certain FCH train applications (e.g. Multiple Units) can already be cost competitive with diesel today in scenarios where the energy to produce hydrogen is cheap (e.g. low-cost electricity, industrial by-product hydrogen). The TCO analysis of an optimistic case shows that if the electricity price and hydrogen consumed per kilometre are lower(4) and the diesel price reaches EUR 1.35 per litre, FCH becomes the least costly alternative. This case reflects the current reality in some European areas like Scandinavia, where low cost electricity can power on-site electrolysis to produce hydrogen.'

So fuel costs are very different.

Whilst in the Executive summary on pg 8:

' FCH technology is expected to play an increasing role in the railway sector starting with Multiple Units, especially for long-range and high-pow-er demanding use cases. By 2030, one in five newly purchased train vehicles in Europe could be powered by hydrogen. The latest develop-ments in the field in Germany and France(1)show that this technology will complement electrification in Europe and enable the com-plete decarbonisation transformation in rail with the flexibility it offers to the train opera-tors. FCH technology in the railway environment competes with existing drive technologies, such as diesel and catenary, but also with emerging technologies such as batteries solu-tions. The study shows that FCH trains perform to the rail system specifications as well as the diesel technology can. The most mature FCH application, i.e. Multiple Units, has, in addition, potential to become cost competitive with die-sel-powered trains in the short term, especially where energy to produce hydrogen is cheap, as, for instance, in Scandinavia. Economically, they can outperform catenary electrification where service frequencies are low, while still providing the environmental gains of electrifi-cation. Owing to their long range and fast refu-elling, FCH technology overcomes the techni-cal constraints of batteries. With this competitiveness of FCH technolo-gy and the given framework conditions, FCH Multiple Units can potentially replace 30 % of diesel volumes as the most market-ready ap-plication by 2030. Current Multiple Units in the market and open tenders suggest that new models can be introduced going forward, also fuelling export opportunities to non-European countries. Shunters and Mainline Locomotives follow with a relatively modest market uptake, mostly due to delayed market introduction - which is not expected to happen before 2023 - and the further need for technology develop-ment'

So the order of what is competitive when is different also, with multiple units well ahead of shunters.

This could all be down to differences between Europe and the US, but also possibly to how costs are counted, so for instance the European study may not take out diesel fuel taxation, although I don't know how onerous that is for trains most place in Europe.