A large-scale demonstration converting biocrude to renewable diesel fuel has passed a significant test, operating for more than 2,000 hours continuously without losing effectiveness. Scientists and engineers led by the US Department of Energy’s Pacific Northwest National Laboratory (PNNL) conducted the research to show that the process is robust enough to handle many kinds of raw material without failing.

The biocrude oil came from many different sources, including wastewater sludge from Detroit, and food waste collected from prison and an army base. The research showed that essentially any biocrude, regardless of wet-waste sources, could be used in the process and the catalyst remained robust during the entire run. While this is just a first step in demonstrating robustness, it is an important step.

—John Holladay, PNNL scientist and co-director of the joint Bioproducts Institute, a collaboration between PNNL and Washington State University

The milestone was first described at a virtual conference organized by NextGenRoadFuels, a European consortium funded by the EU Framework Programme for Research and Innovation. It addresses the need to convert biocrude, a mixture of carbon-based polymers, into biofuels. In the near term, most expect that these biofuels will be further refined and then mixed with petroleum-based fuels used to power vehicles.

For the industry to consider investing in biofuel, we need these kinds of demonstrations that show durability and flexibility of the process.

Just as crude oil from petroleum sources must be refined to be used in vehicles, biocrude needs to be refined into biofuel. This step provides the crucial “last mile” in a multi-step process that starts with renewables such as crop residues, food residues, forestry byproducts, algae, or sewage sludge. For the most recent demonstration, the biocrude came from a variety of sources including converted food waste salvaged from Joint Base Lewis-McChord, located near Tacoma, Wash., and Coyote Ridge Corrections Center, located in Connell, Wash. The initial step in the process, called hydrothermal liquefaction, is being actively pursued in a number of demonstration projects by teams of PNNL scientists and engineers. 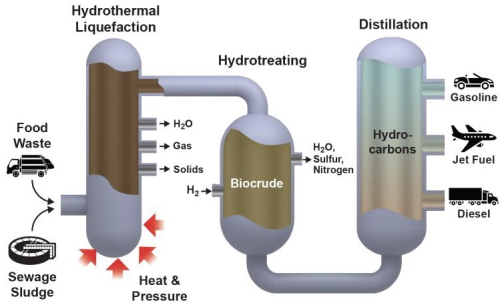 Biowaste to biofuel conversion process. Wet wastes from sewage treatment and discarded food can provide the raw materials for an innovative process called hydrothermal liquefaction, which converts and concentrates carbon-containing molecules into a liquid biocrude. This biocrude then undergoes a hydrotreating process to produce bio-derived fuels for transportation. (Illustration by Michael Perkins | Pacific Northwest National Laboratory)

The hydrotreating process introduces hydrogen into a catalytic process that removes sulfur and nitrogen contaminants found in biocrude, producing a combustible end-product of long-chain alkanes, the desirable fuel used in vehicle engines. Chemist Marie Swita analyzed the biofuel product to ensure it met standards that would make it vehicle-ready.

The purpose of this project was to show that the commercially available catalyst could stand up to the thousands of hours of continuous processing that would be necessary to make biofuels a realistic contributor to reducing the world’s carbon footprint. Thorson pointed out that it also showed that the biofuel product produced was of high quality, regardless of the source of biocrude―an important factor for the industry, which would likely be processing biocrude from a variety of regional sources.

Knowing that transporting biocrude to a treatment facility could be costly, modelers are looking at areas where rural and urban waste could be gathered from various sources in local hubs. For example, they are assessing the resources available within a 50-mile radius of Detroit, Mich. There, the sources of potential biocrude feedstock could include food waste, sewage sludge and cooking oil waste. In areas where food waste could be collected and diverted from landfills, much as recycling is currently collected, a processing plant could be up to 10 times larger than in rural areas and provide significant progress toward cost and emission-reduction targets for biofuels.

Milestones such as hours of continuous operation are being closely watched by investor groups in the U.S. and Europe, which has set aggressive goals, including being the first climate-neutral continent by 2050 and achieving a 55% reduction in greenhouse gas emissions by 2030.

A number of demonstration projects across Europe aim to commercialize this process in the next few years.

The next steps for the research team include gathering more sources of biocrude from various waste streams and analyzing the biofuel output for quality. In a new collaboration, PNNL will partner with a commercial waste management company to evaluate waste from many sources. Ultimately, the project will result in a database of findings from various manures and sludges, which could help decide how facilities can scale up economically.

Since at least three-quarters of the input and output of this process consists of water, the ultimate success of any industrial scale-up will need to include a plan for dealing with wastewater.

This too is an active area of research, with many viable options available in many locations for wastewater treatment facilities.

That goes nicely with the Libertine piston!

Carbon feedstock is carbon feedstock no matter if it's from sewage, spoiled food or crude. the common denominator is fossil fuel burned in ICEs creating pollution, period. Reducing pollution is the reason we want to quit producing carbon fuels, from all sources.

But you don't have to burn the carbon feedstock for it to turn to in to CO2 or methane - microbes and other natural processes will do that anyways so until we eliminate ICE engines it's better to use carbon that is already in the carbon cycle than to bring up more sequestered carbon.

Look,
over the time frame of concern for global warming, 50, 100, 150 years ANY carbon that is not fixed in the soil will evolve into the atmosphere.

So sludge, food waste, farm waste etc.... will not all remain fixed in the soil.

It will degrade, mineralize and RELEASE CO2.

IF ( big if ) these biofuel processes supplant carbon based oil which is removed ( fixed already ) from buried fossil fuel deposits then it is a win.

These biofuel precursors would otherwise degrade over the timeframe of concern, releasing CO2.

Start with tech that gives the biggest bang ( err.. you know what I mean )

Yes I know we need more plastic like ... But bio fuel is quite capable of further processing to many different chemicals such as plastics. Plastics are an integral part of life today and there are rumblings about bio degradable and other value added reprocessing solutions towards eliminating waste pollution. All that has to happen.
The point of seeing the 'precursor waste streams diverted is entirely valid for while there are as the author points out costs and energy inputs, they should and can be a viable alternative to decomposition release of CO2 or N3 to the atmosphere or burning for power as happens in more than a few first world cities let alone unplanned fires in municipal dumps.
If every fossil hydro carbon or coal extraction ceased tomorrow we would still need / desire the lubricants and many other items with carbon chain chemistry.