A new study by the International Council on Clean Transportation (ICCT) on aviation fuel burn and associated greenhouse gas emissions has found that overall fuel burn and, therefore, CO2 emissions from US airlines increased by 7% from 2005 to 2019. Further, the study found that low-cost carriers (LCCs) such as Spirit, Frontier, and Southwest have driven virtually all that airline emissions growth since 2005. 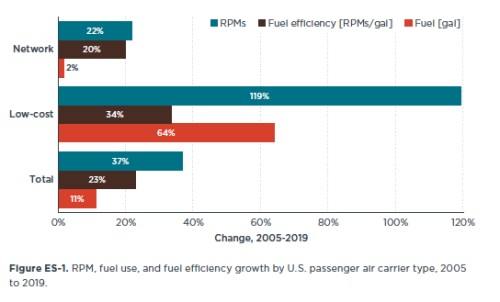 The paper provides a bottom-up, detailed fuel consumption inventory for all commercial flights to, from, and between US airports using The ICCT’s Global Aviation Carbon Assessment (GACA) model.

Network carriers offset almost 90% of their traffic growth via improvements in fuel efficiency from 2005 to 2019. In contrast, LCC traffic increased nearly three and a half times faster than fuel efficiency improved in terms of revenue passenger miles per gallon (RPM/gal) over the same period, driving large increases in fuel use and CO2. This is despite LCCs having relatively high fuel efficiency due to factors like newer aircraft, higher load factors, and higher seating densities.

As a result, LCCs were responsible for 88% of growth in fuel use and CO2 emissions from US airlines between 2005 and 2019.

Other key findings are:

The study comes as a wave of LCCs file for initial public offerings, and as the Biden Administration considers how to incorporate aviation emissions into an economywide net-zero target for the US. LCCs, while fuel-efficient, are growing much faster than network carriers and have been slow to adopt net-zero targets for their operations, the authors said.

If we had high speed rail or hyperloops, much of this short air traffic wouldn't be needed and that would reduce airline pollution.
Come on folks! We gotta start using our intelligence to reduce fossil fuel usage.

flights less than 500 miles can use fuel cells