MIT researchers and colleagues at two national laboratories have developed a sulfonamide-based electrolyte that enables stable cycling of a commercial LiNi0.8Co0.1Mn0.1O2 cathode with a cut-off voltage up to 4.7 V in lithium-metal batteries (LMBs). The electrolyte not only suppresses side reactions, stress-corrosion cracking, transition-metal dissolution and impedance growth on the cathode side, but also enables highly reversible Li metal stripping and plating on the lithium-metal anode (LMA), leading to a compact morphology and low pulverization.

In a paper in the journal Nature Energy, the MIT team reports that a lithium-metal battery with the electrolyte delivers a specific capacity of >230 mAh g−1 and an average Coulombic efficiency >99.65% over 100 cycles. Even under harsh testing conditions, the 4.7 V lithium-metal battery can retain >88% capacity for 90 cycles.

Many cathode degradation mechanisms are intensified in LMBs operated under high cut-off voltages, including cathode–electrolyte side reactions, bulk and surface phase transformation, cracking of the NMC secondary particles, over-growth of cathode–electrolyte interphases (CEIs), gas evolution and transition metal (TM) dissolution. Moreover, dissolved TMs eventually waft to the anode side where they can be reduced and accumulated, similar to the ‘shuttling effect’ in lithium–sulfur batteries, leading to the destruction of the anode’s solid–electrolyte interphase (SEI), consumption of active Li, and impedance growth.

Also, failures often occur on the LMA as the electrolyte influences the cycling morphology and reversibility of the LMA. A limited cyclable Li inventory can be easily depleted by side reactions or become kinetically unreachable due to electronic/ionic isolation. Lean electrolyte itself can also be rapidly depleted or contaminated by side reactions, and loss of ionic percolation can happen due to wetting of large-surface-area and large-thickness Li deposits.

Since the aforementioned challenges in high-voltage LMBs are closely related to the electrolyte, the design of novel liquid electrolytes, which have the desired compatibility with both high-voltage cathodes and LMAs, offers a promising solution.

The basic raw materials for this electrolyte are inexpensive (though one of the intermediate compounds is still costly because it’s in limited use), and the process to make it is simple. So, this advance could be implemented relatively quickly, the researchers say.

The electrolyte itself is not new, explains Jeremiah Johnson, a professor of chemistry an co-corresponding author. The new application was found somewhat serendipitously, after it had initially been developed a few years ago by MIT professor Yang Shao-Horn, Johnson, and others, in a collaborative venture aimed at lithium-air battery development.

There’s still really nothing that allows a good rechargeable lithium-air battery. We designed these organic molecules that we hoped might confer stability, compared to the existing liquid electrolytes that are used.

They developed three different sulfonamide-based formulations, which they found were quite resistant to oxidation and other degradation effects. Then, working with Li’s group, postdoc Weijiang Xue decided to try this material with more standard cathodes instead.

Because the electrode material expands and contracts anisotropically as it gets charged and discharged, this can lead to cracking and a breakdown in performance when used with conventional electrolytes. But in experiments in collaboration with Brookhaven National Laboratory, the researchers found that using the new electrolyte significantly reduced these stress-corrosion cracking degradations. 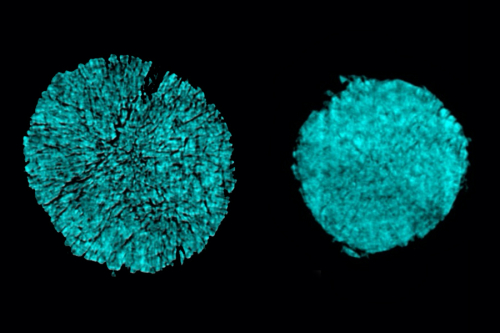 X-ray tomography images taken at Brookhaven National Lab show cracking of a particle in one electrode of a battery cell that used a conventional electrolyte (as seen on the left). The researchers found that using a novel electrolyte prevented most of this cracking (right). Image: courtesy of the researchers

The problem was that the metal atoms in the alloy tended to dissolve into the liquid electrolyte, losing mass and leading to cracking of the metal. By contrast, the new electrolyte is extremely resistant to such dissolution.

The next step is to scale the production to make it affordable. Because this is essentially a drop-in replacement for an existing electrolyte and doesn’t require redesign of the entire battery system, co-corresponding author MIT professor Ju Li says, it could be implemented quickly and could be commercialized within a couple of years.

There’s no expensive elements, it’s just carbon and fluorine. So it’s not limited by resources, it’s just the process

Voltage for lead/acid cells are 2 volts. LFP batteries runs about 3.2 volts, IiPo is about 4.2 volts. 4.7 volt cell could have an advantage of using less cells for a give voltage requirement; for example: a 12 volt lead battery uses 24cells for a 48 volt battery while a LFP uses 15, a LiPo uses 12 and this chemistry could use 11.

@ Lad:
The absolute permissible peak voltage for LiPos is 4.25 volts; progressing beyond this thresh-hold results in permanent damage to the cells. The mean voltage amounts to 3.6 volts.