Con Edison and its partners Lion Electric and Posi-Plus are developing the country’s first all-electric bucket truck capable of performing the full range of work that electric utilities require of such vehicles. 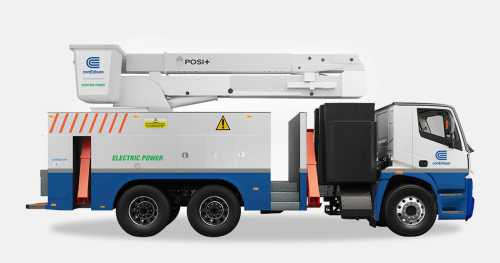 The truck will be unique on US roads when Con Edison takes possession early next year, running entirely on electricity as it lifts lineworkers and equipment as high as 60 feet for construction, maintenance and repair work.

Medium- and heavy-duty trucks are more challenging to electrify than cars, but the purchase of our first all-electric bucket truck shows the market is real today and it will only accelerate from here. While initially small in scope, this represents an important step in Con Edison’s journey toward fleet electrification.

We are all in on electric vehicles, and that means transitioning our own fleet while making it easier for our customers to charge up their own vehicles.

Lion Electric, a leading North American manufacturer of zero-emission heavy-duty vehicles, and Posi-Plus are building the truck to Con Edison’s specifications, with a Lion8 all-electric chassis and aerial equipment drive. Delivery of the vehicle in early 2022 will be followed by its use in a pilot program.

If this initiative is successful, the bucket truck will be integrated as part of Con Edison’s fleet of trucks that maintains the overhead electric system in New York City and Westchester County, N.Y.

The class 8 truck will be capable of putting in a full day’s work and traveling an estimated 130 miles on a single charge. When not in service, it will top off its batteries in about eight hours using two Level 2 chargers.

As of last year, every new light-duty vehicle that Con Edison buys is a plug-in hybrid or all-electric. The company is exploring a range of technologies to reduce its fossil fuel use in medium- and heavy-duty vehicles, and it may add more all-electric bucket trucks to its fleet in the future.

Bucket trucks are a critical tool for building and maintaining the electric grid, which is set for major investment and expansion as the country shifts toward cleaner sources of energy. Con Edison owns more than 300 such trucks.

While electric vehicles carry higher upfront costs than traditional gas-powered models today, they can already save money on fuel costs, and battery prices are dropping rapidly. Con Edison’s all-electric bucket truck will be quieter than models with an internal combustion engine, and the electrified version won’t emit any carbon dioxide or other forms of air pollution.

Utility trucks are often required to spend significant amounts of time idling as they prepare for and perform work, making them an attractive target for electrification.

Con Edison is a subsidiary of Consolidated Edison, Inc., one of the US’ largest investor-owned energy companies, with approximately $12 billion in annual revenues and $63 billion in assets. The utility provides electric, gas and steam service to more than three million customers in New York City and Westchester County, N.Y.