During Volkswagen’s recent Power Day (earlier post), the company referred to a long-term strategy of using high-manganese cathodes for its volume segment. This is a prominent role for a chemistry not currently in widespread use, according to market research firm IDTechEx. Improvements to energy density are unlikely using high-manganese cathodes, with motivation for developing these materials instead stemming from a desire to reduce cost and eliminate cobalt consumption, the company added. 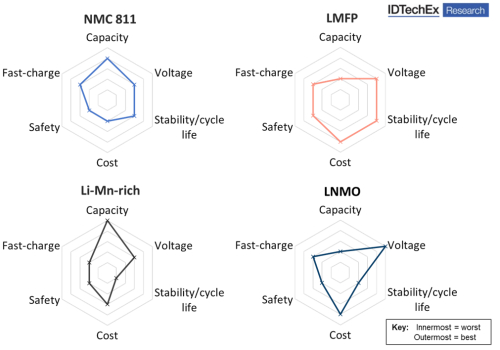 LMO (LiMn2O4). commercially available high-manganese cathodes already exist in the form of the lithium-manganese oxide spinel, which was used for the first-generation Nissan LEAF. However, it suffers from accelerated degradation at elevated temperatures, which leads to poor cycle life, hence the replacement of LMO with NMC in subsequent Nissan LEAF generations. With a theoretical capacity of only 148 mAh/g and an average discharge voltage of approximately 4.0-4.1 V, this cathode would lead to lower energy densities compared to cells using current state-of-the-art NMC or NCA layered oxides.

LMP (LiMnPO4) and LMFP (LiMnxFe1-xPO4). LMP shares the same olivine crystal structure as LFP but operates at a more positive voltage, increasing energy density. Cycle life tends to be low, due to the high manganese content, while the material has poor electronic and ionic conductivity, meaning that reasonable capacities are generally only measured at low charge/discharge rates. The addition of Fe to form LMFP can improve conductivity and cycle life but lowers the average voltage. LMFP may bridge the gap between LFP and NMC/NCA but the reversible capacities of LMP and LMFP are too low to reach the cell-level energy densities of cells using NMC/NCA, IDTechEx said.

Li-Mn-rich (xLi2MnO3·(1 - x)LiMO3 where M = Ni, Mn, Co). The lithium-manganese rich, layered-oxide cathode is one of only a few options, alongside conversion type cathodes, that offer a capacity improvement over current state-of-the-art NMC and NCA materials. However, stability and cycle life are poor and require considerable improvement before commercialization can be expected. BASF’s high manganese cathode, NCM 217, may refer to a Li-Mn-rich type material.

Thus, this leaves LNMO as the most likely cathode to which VW was referring, according to IDTechEx. The high-voltage LNMO spinel (LiNi0.5Mn1.5O4) operates at a voltage of approximately 4.7 V vs. Li/Li+ and also holds potential as a high-power cathode due to its three-dimensional structure (improving Li diffusion pathways). However, its theoretical specific capacity is only 147 mAh/g, meaning it will not offer any advantage to specific energy or energy density over high-Ni NMC or NCA cathodes.

Furthermore, key issues with LNMO revolve around its low cycle life and poor stability, especially at elevated temperatures, while its high voltage also necessitates developments to electrolytes. As outlined by Volkswagen, the use of high-manganese cathodes represents a long-term strategy. 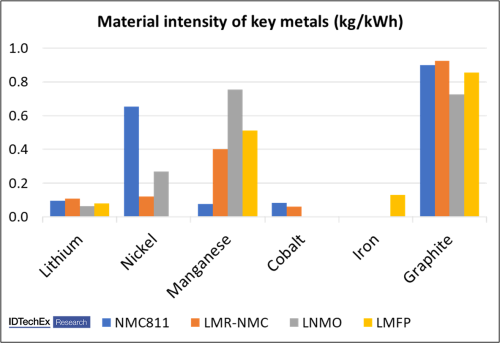 Nevertheless, there is some commercial development of LNMO from companies such as Haldor Topsoe, NEI Corporation, and Targray. The potential for cost reduction that the material holds, without significantly reducing energy density, added to the possibility of eliminating cobalt consumption, suggests there is a future for this chemistry. The graph above shows how both nickel and cobalt intensity can be reduced by high manganese cathodes such as LNMO, offering a path to lower Li-ion battery costs, IDTechEx said.

Fully cost competitive long range BEVs ex subsidy and mandate are not the given enthusiasts assume, and which they have persuaded governments to also assume.

Why keep on playing yo yo when there are two competitive and compelling solutions moving towards the pipeline?
https://spatialald.com/SALD-batteries-for-electric-cars.html
https://innovationorigins.com/australian-and-german-scientists-develop-lithium-sulfur-battery-thats-4-times-more-powerful/

For a variety of reasons, IDTechEx dismisses all but one manganese chemistries, LNMO, but it doesn´t seem to be aware of the work done by Nano One Materials in that field. In addition, it doesn´t appear to know either that the Canadian firm is already partnering with #VW and a major cathode producer and that its LNMO process, among other things, uses "fewer steps & simpler feedstocks while making a coated...powder that improves the interface with solid and liquid electrolytes..."