Researchers at the Fraunhofer-Gesellschaft have developed a membrane technology for the energy-efficient and economic separation of hydrogen from natural gas. This technology makes it possible for the two substances to be routed through the national natural gas grid together and then isolated from one another at their final destination. This marks a major step forward in the transportation and distribution of hydrogen as an energy source.

Hydrogen is seen as playing a major role in establishing a CO2-free energy supply. If hydrogen is collected from renewable sources such as wind and solar power, there are no climate-damaging emissions. However, the means of transporting this “green” hydrogen from the producer to the consumer are not established; Germany still does not have an extensive distribution network for hydrogen.

The HYPOS (Hydrogen Power Storage & Solutions East Germany) project is working to create an intelligent infrastructure of distributor networks and storage stations that will make hydrogen available to all regions.

The HYPOS project partners are pursuing the idea, among other approaches, of transporting hydrogen along with natural gas. Germany has a 511,000-kilometer gas grid and 33 gas storage locations.

The advantage of this infrastructure is that it allows hydrogen to be fed into the natural gas grid as well. The two substances can be transported together in one line. Once they arrive at the destination, we can separate them from one another again as needed.

Alongside ceramic-based materials, the Fraunhofer Institute for Ceramic Technologies and Systems IKTS is researching the potential of other materials such as carbon as a solution. Carbon forms an ultrathin layer on porous, ceramic substrates where it acts as a membrane, separating natural gas and hydrogen from each other.

There are various processes involved in membrane production, starting with custom polymer synthesis. Polymers are substances consisting of branched macromolecules. These are then applied to the porous substrate. When the polymer is heated up and starved of oxygen at the same time, it forms a layer of carbon on its surface. The pores in the carbon are less than a nanometer in diameter, and this makes them effective for gas separation.

Physical and chemical processes can be employed to adapt the membrane’s separation behavior even further. Fraunhofer IKTS has been collaborating with Leipzig-based DBI Gas- und Umwelttechnik GmbH to develop tubular carbon membranes. 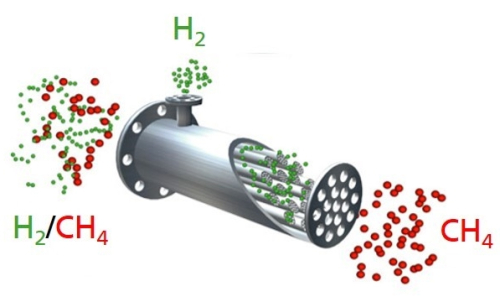 The gas mixture is surrendered to the input side of the membrane. The small hydrogen molecules pass through the membranes and the larger methane molecules are held back. © Andreas Junghans GmbH

During the separation process, hydrogen and natural gas are pushed through the tubular modules. The smaller hydrogen molecules are forced through the pores in the membrane and reach the outside in the form of gas, the larger methane molecules on the other hand are held back.

This gives us hydrogen with an 80 percent degree of purity. We then filter the residual natural gas in a second separation step. The end result is a purity of over 90 percent. 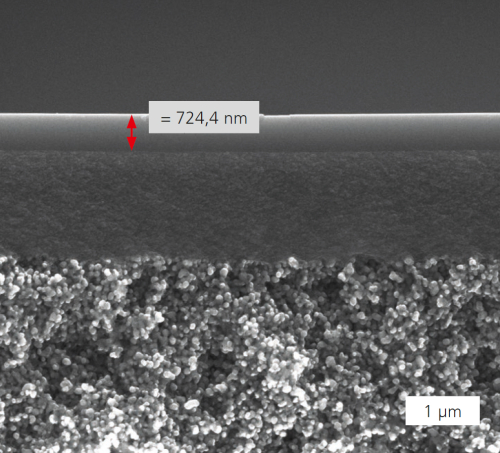 Exposure in the scanning electron microscope: Carbon membrane with a layer thickness of less than 1 micrometer. © Fraunhofer

Hydrogen with this degree of purity can be used in a number of applications, such as steel production. In high-temperature furnaces, hydrogen replaces carbon in the process of reducing iron ore to iron, making an important contribution to cutting CO2 emissions.

The researchers at Fraunhofer IKTS are currently working on scaling the technology to an extent that will allow the separation of larger volumes of natural gas and hydrogen. The construction of prototypes is already in the pipeline.

I suppose the question is: can the natural gas grid take hydrogen or will it cause embrittlement and other bad things ?
My understanding is that you need a stainless steel pipe to take H2.
More on it.
https://www.energy.gov/eere/fuelcells/hydrogen-pipelines