More details on the Mercedes-Benz EQS

The Mercedes-Benz EQS is the stand-alone, all-electric member of the new S-Class range and will be launched in Europe in August. (Earlier post.) With the EQE business sedan and the SUV variants of the EQS and EQE, further models based on the new architecture will follow soon. 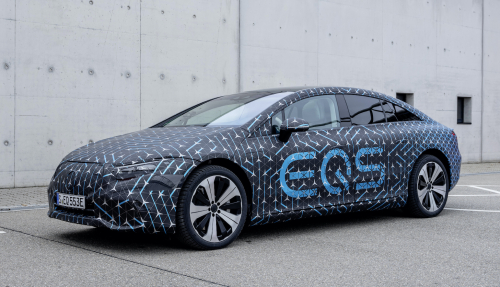 The EQS will allow customers in the luxury segment to benefit fully from all the advantages of an all-electric architecture with respect to space and design. With ranges of up to 770 km (478 miles) according to WLTP, the EQS meets the requirements on a progressive saloon in the S-Class segment in this respect as well. The new world record in aerodynamics for production cars with a Cd value of 0.202 contributes significantly to this.

The new generation of electric vehicles in the luxury and executive segment is based on a custom-developed architecture, which is scalable in every aspect and can be used across model series. The wheelbase and track as well as all other system components, especially the batteries, are variable due to the modular design. The vehicle concept is thus optimized to meet every requirement of a future-oriented, battery-electric model family.

All EQS models have an electric powertrain (eATS) at the rear axle, while the versions with 4MATIC also have an eATS at the front axle. An eATS basically comprises an electric motor, a (spur) transmission, the differential and the power electronics. This is compactly located on the top of the eATS.

The EQS is available with rear- and all-wheel drive. The compact electric motors on the front and rear axles are permanently excited synchronous motors. The motor on the rear axle is particularly powerful due to six-phase operation: two windings with three phases each. The stators with pull-in winding deliver a particularly strong magnetic field. 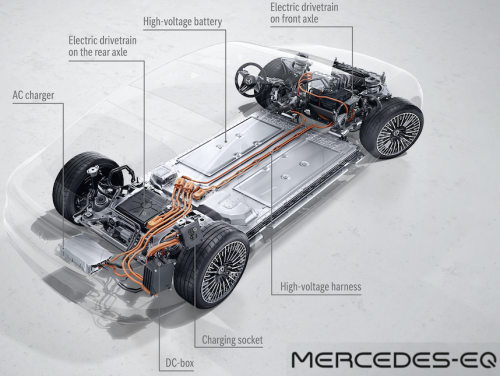 A water lance in the shaft of the rotor cools the rotor. Further cooling elements in the cooling circuit include stator ribs; a needle-shaped pin-fin structure on the inverter; and transmission oil cooler: also more efficient during cold driving (gear oil is warmed up).

4MATIC models with Torque Shift function intelligently and continuously distribute the drive torques between the front and rear axles and ensures that the most efficient eATS (electric drivetrain) is used in each case. Response is much faster response than with mechanical all-wheel drive. The eATS can be regulated independently of each other. Torque is checked 10,000 times per minute and set if necessary.

Recuperation is adjustable by the driver in three steps via shift paddles on the steering wheel. In DAuto, up to 5 m/s² are achieved, of which 3 m/s² are due to energy recovery (2 m/s² via the wheel brakes). The recuperation output is up to 290 kW.

Braking to stop is possible. Deceleration is also for detected vehicles traveling ahead until they come to a stop, for example at traffic lights. In versions with rear-wheel drive, recuperation is limited by traction.

The EQS marks the launch of a new generation of batteries with significantly higher energy density. The EQS offers two battery sizes depending on power and drive (rear or 4MATIC) with usable energy content of 90 or 107.8 kWh. The 107.8 kWh battery is around 26% more than the EQC. 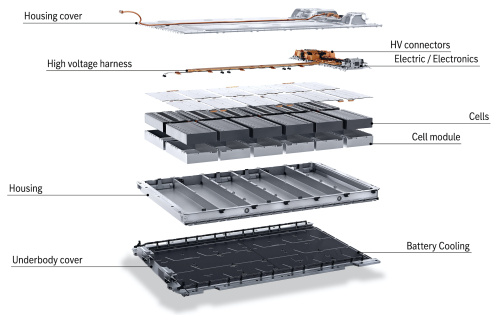 The innovative battery management software, developed in-house, allows updates over the air (OTA). The energy management of the EQS is therefore kept up to date throughout the lifecycle. A major advance in sustainability has been achieved in the cell chemistry: the proportion of cobalt has been reduced to ten percent, and the optimised active material consists of nickel, cobalt and manganese in a ratio of 8:1:1.

The EQS can be charged with up to 200 kW at fast charging stations with direct current. At home or at public charging stations, the EQS can be conveniently charged with up to 22 kW with AC using the on-board charger. The EQS will also allow bidirectional charging in Japan, i.e. charging in both directions. In addition, there are various intelligent charging programs that can be activated automatically depending on the location, and functions such as particularly battery-saving charging.

The EQS offers Plug & Charge via the Mercedes me Charge app. Other highlights include the densest network of charging points, with more than 500,000 of them in 31 countries, and green charging.

This is supposed to be a car for discerning (and wealthy) customers - so why do they quote NEDC figures for kWh / 100km ?
At least the headline figure is WLTP, but no one should quote NECD for this sort of measure as it was not designed for this type of measurement and gives a figure that is about 30% too high.

Mahonj, China. In China they do use NEDC, and i'm sure this car will sell well in China, so thats probably why they indicate NEDC.