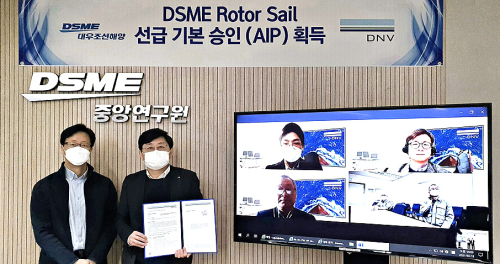 At the Daewoo Shipbuilding & Marine Engineering R&D Center, a certification ceremony for the Rotor Sail System was held in the presence of related officials including Choi Dong-gyu (right), the president of the Central Research Institute.

A rotor sail is a tall rotating cylindrical column on the deck of a ship that provides propulsion from the wind. Rotor sail technology is based on the Magnus effect. When wind meets the spinning Rotor Sail, the air flow accelerates on one side of the Rotor Sail and decelerates on the opposite side of the Rotor Sail. The change in the speed of air flow results in a pressure difference, which creates a lift force that is perpendicular to the wind flow direction. (Earlier post.)

The same principle applies to all rotating spheres and cylinders. This can also be observed for example in golf, tennis, or football, where spinning balls curve in flight.

DSME says that the rotor sail has a large driving force compared to its volume, and is also simple to install and easy to manage.

Daewoo Shipbuilding & Marine Engineering analyzed that the application of this system will result in fuel savings of more than 5% based on the Energy Efficiency Design Index (EEDI), which is suggested by the International Maritime Organization (IMO) as an energy saving evaluation measure.

Rotor sail technology is already attracting attention in the global shipbuilding industry. DSME aims to produce this system itself for the first time in the domestic industry. With this, DSME expects to have a competitive edge in global orders and provide ship owners with eco-friendly and fuel-efficient ships that can further reduce operating costs.

DSME is one of the Big Three shipbuilders of South Korea, along with Hyundai and Samsung.