Renewable hydrogen systems manufacturer Ways2H Inc. and its shareholder and technical partner Japan Blue Energy Co. announced the completion of a facility in Tokyo that will convert sewage sludge into renewable hydrogen fuel for fuel cell mobility and power generation.

The facility was developed and built in partnership with the Tokyo Metropolitan Government, TODA Corporation, TOKYU Construction, CHIYODA Kenko and researchers at Tokyo University of Science to help Japan meet growing demand for renewable hydrogen while demonstrating a new pathway for sustainable disposal of waste.

The waste-to-hydrogen facility, located at the Sunamachi Water Reclamation Center near Tokyo Bay, will process 1 ton of dried sewage sludge per day, to generate 40 to 50 kilograms of hydrogen per day, enough to fuel 10 passenger vehicles or 25 fuel-cell e-bikes. 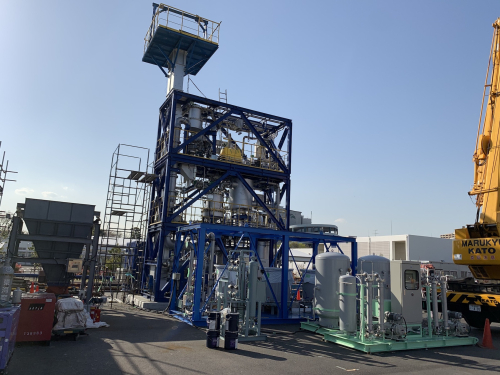 A new facility in Tokyo that will convert sewage sludge into renewable hydrogen gas for fuel-cell vehicles is nearing completion. This project is a collaboration of Japan Blue Energy Co., TODA Corporation, the Tokyo Metropolitan Government, TOKYU Construction, CHIYODA Kenko and researchers at Tokyo University of Science. The technology was developed by Japan Blue Energy Co. and is commercialized worldwide by Ways2H. Photo courtesy of: TODA / Japan Blue Energy Co. Ltd.

With construction, led by TODA Corporation, now complete, the companies plan to start ramping up operations by mid-2021.

In addition to wastewater sludge, plastic, paper, municipal solid waste and other refuse will be processed. The waste is heated to a high temperature and converted into a gas, from which pure hydrogen is extracted. The facility is generates its own fuel in a closed-loop process.

JBEC says that the most significant feature of its technology is the use of alumina balls as a heating carrier. Through its BLUE process alumina balls (heat carriers) heated to high temperatures contact biomass materials such as woodchips and sewage sludge in the pyrolyzer, generating the pyrolyzed gas which contains hydrogen, CO, CO2, and methane.

In the reforming zone, the pyrolyzed gas contacts steam under higher temperatures by partial oxidation, producing hydrogen-rich gas via the steam reforming reaction. By mixing heat carriers and raw materials, it does not cause uneven heat in the reaction furnace. This suppresses tar generation, which is the major factor in equipment problems such as blockages in conventional gasification plants, the company said.