Researchers at King Abdullah University of Science and Technology (KAUST) in Saudi Arabia have developed a continuous electrically-driven membrane process which successfully enriches lithium from seawater samples of the Red Sea by 43,000 times (i.e., from 0.21 to 9013.43 ppm) with a nominal Li/Mg selectivity >45 million.

They precipitated lithium phosphate with a purity of 99.94% directly from the enriched solution, thereby meeting the purity requirements for application in the lithium battery industry. Preliminary economic analysis shows that the process can be made profitable when coupled with the Chlor-alkali industry.

An open-access paper on their work is published in the RSC journal Energy & Environmental Science.

Seawater contains significant quantities of lithium—approximately 5,000 times more than is found on land—potentially providing an almost unlimited resource of lithium for meeting the rapid growth in demand for lithium batteries. However, lithium extraction from seawater is exceptionally challenging because of its low concentration (~0.1–0.2 ppm) and an abundance of interfering ions (i.e., >13000 ppm of sodium, magnesium, calcium, and potassium ions, among others).

The presence of monovalent ions, such as sodium and potassium, is not a significant issue in the conventional precipitation method since their salts are highly soluble. Instead, the lithium concentration and the ratio of lithium to other multivalent ions, such as Mg2+ and Ca2+, are the key factors to consider.

In terms of separation, the membrane process is one of the most energy-efficient methods, with a potential to save up to 90% energy in many industrially important separation processes. In addition, this process runs continuously, and is easy to scale up. Unlike conventional membrane processes where the transport proceeds down the concentration gradient, the electrically-driven membrane process can up-grade the concentration; this system has been commercialised for use in the purification of hydrogen. As lithium possesses one of the smallest ionic sizes, we considered that it could be technically feasible to use a molecular sieving membrane to enrich lithium and to remove multivalent ions at an affordable energy cost. After enrichment, the lithium can be readily extracted using the conventional precipitation method.

The electrical cell used in the paper was divided into three compartments: cathode, feed and anode. The cathode and the feed compartments were separated by a dense glass-type Li0.33La0.56TiO3 (LLTO) membrane with a diameter of ~20 mm and a thickness of ~55 μm.

LLTO is one of the superior solid-state lithium ion superconductors. The LLTO membrane proved to provide efficient separation between lithium and other interfering ions, in addition to a high lithium permeation rate. 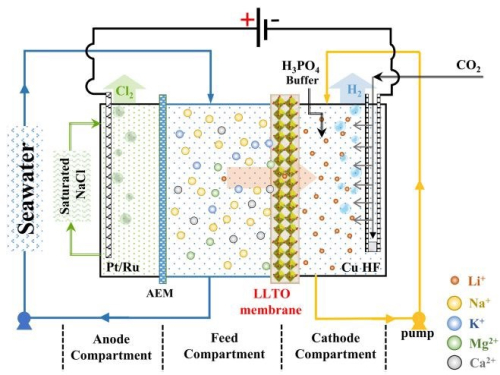 Schematic illustration of the three-compartment electrical cell to continuously enrich lithium from the feed solution to the cathode compartment and simultaneously generate H2 and Cl2 at the cathode and anode, respectively. Li et al.

A CO2 and phosphate buffer solution stabilises the pH and prolongs the lifetime of the membrane. The team found that the LLTO membrane could be used for more than 2000 hours with a negligible decay in performance.

Although a rigorous economic analysis will be still necessary to include other capital and operating expenses, it is arguable that the energy cost is the major expenditure in this process. Furthermore, the process possesses further potential for optimisation, and for its combination with seawater desalination to create innovative designs under the energy-water nexus scheme, which will further improve the process profitability. Hence, it is expected that our approach will lead to the development of a promising process to secure the supply of lithium for future energy uses.

' the total Faradaic efficiencies of all stages were close to 100% (Figure 2d). In the first stage, ~47.06% of electrical energy was used to transport lithium, while in the remainder of the stages, ~100% of electrical energy was used for lithium migration. Based on these data, we estimated the total electricity required to enrich 1 kg lithium from seawater to 9000 ppm in five stages to be 76.34 kWh. Simultaneously, 0.87 kg H2 and 31.12 kg Cl2were collected from the cathode and the anode, respectively. Taking the US electricity price of US$ 0.065/kWh into consideration, the total electricity cost for this process is approximately US$ 5.0. In addition, based on the 2020 prices of hydrogen and Cl2 (i.e., US$ 2.5–8.0/kg and US$ 0.15/kg, respectively),34 the side-product value is approximately US$ 6.9–11.7, which can well compensate for the total energy cost. It should also be noted that the current Cl2 utilisation capacity in the chlor-alkali industry is ~80 Mtons/yr. Even in the case where all the world lithium capacity is produced from our extraction process, the amount of Cl2 produced will be <3 Mtons, and so will have very little effect on the total market. It is also noted that the total concentration of other salts after the first stage is less than 500 ppm, which implies that after lithium harvest, the remaining water can be treated as freshwater. Hence, the process also has a potential to integrate with seawater desalination to further enhance its economic viability.'

The question that arises in my mind is, what possible long term effect may the removal of Lithium from seawater have for all living creatures presently still thriving in the oceans worldwide?

I find it odd when apparently what is being done is read straight past, in favour of some million year perspective.

Getting to grips with that instead of a God's eye view, with 5,000 times the amount of lithium in the ocean compared to recoverable land resources, ie the areas with really high concentrations of lithium which make it economic to mine, then it would appear with recycling etc then the sea resource should last bloody ages,

And in fact it it not that there is little lithium in the crust, it is just not highly concentrated, so continental erosion should do a tidy job of replenishing it in the ocean.

Jumping to conclusions has never paired with reliable and wise decisions. Looking beyond the visible horizon and reviewing possibilities has nothing to do with "God's eye view" rather with horse- or common sense which evidently not everyone possesses.

You are certainly right that not everyone appears to possess any commonsense,
Thank you for providing irrefutable proof of that, at great personal cost.