In LCV applications, Stellantis said, not all use cases can be covered by battery-electric technology. The company says that LCV customers are asking for longer range, shorter charging times, and payload capability.

To deliver this, Stellantis designed a mid-power fuel cell system architecture. To preserve payload, all fuel cell components were integrated outside the cargo space. By integrating the system into the current LCV electrified platform, Stellantis enabled a minimum amount of change between the full battery-electric platform and the hydrogen version. 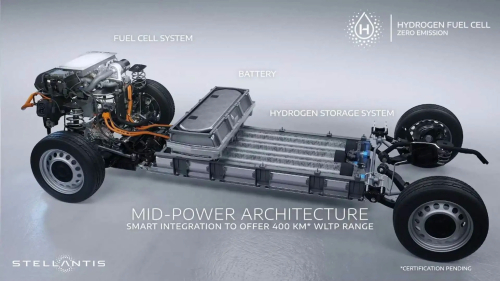 Stellantis chose its existing medium vans—Citroën Jumpy, Peugeot Expert and Opel Vivaro—as the base vehicle for the mid-power architecture. Because a mid-power fuel cell is also mid-size, the whole system can be integrated under the hood.

For the development of the fuel cell stack and the hydrogen storage system, Stellantis entered into a strategic partnership with Faurecia and Symbio, Faurecia’s JV with Michelin.

Faurecia will develop, supply and assemble hydrogen storage systems from its global center of expertise in Bavans, France. With three high-pressure homologated tanks at 700 bars and carrying a total of 120 liters of hydrogen per vehicle, Stellantis’ light commercial vehicles will have a zero-emission range of more than 400 kilometers.

Drawing on 10 years’ experience, Symbio has developed for Stellantis a compact, low-weight fuel cell system delivering 45kW gross power. These systems will be produced in France at Symbio’s Venissieux facility and, from 2023, in its new St Fons site.

Faurecia worked with Stellantis to optimize the system’s design as well as its integration to offer the best-in-class weight/performance ratio on the market.

The fuel cell system is capable of providing enough power for continuous highway speed. When required, peak power is provided by the battery located under the front seats. The battery is a carry-over from Stellantis’ existing plug-in hybrid (PHEV) program.

The battery covers power requirements for conditions such as acceleration, but also during start-up and first mile. This enables improved durability when compared to full-power systems, as the fuel cell system can run at optimum operating conditions.