Toyota has commissioned Victoria’s first commercial-grade permanent hydrogen production, storage and refuelling facility at its former manufacturing site at Altona in Melbourne’s west. Hydrogen is produced on site by a 200kW electrolyzer that uses electricity to split water into hydrogen and oxygen components and has the capacity to produce up to 80kg of hydrogen per day. 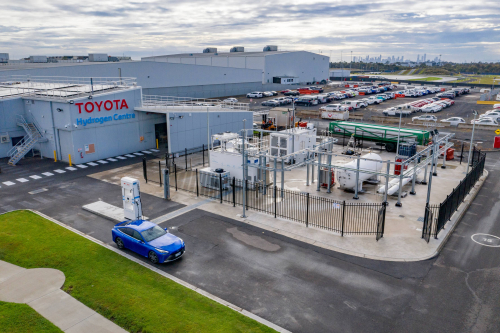 Power for the electrolyzer is drawn from a combination of an 87kW solar array, a 100kW battery storage and the grid, depending on what’s available at the time.

The hydrogen is then stored in a bank of storage tubes at medium and high pressure to be able to refuel both the fuel-cell forklifts that Toyota uses in other parts of the Altona complex and hydrogen FCEVs, such as the new Mirai FCEV.

Toyota Australia President and CEO Matthew Callachor said the Toyota Hydrogen Center was built to showcase the benefits of hydrogen fuel cell technology as part of its commitment to developing sustainable technologies for future mobility and energy needs.

Sustainably produced hydrogen is the core element to fuel vehicles like the Toyota Mirai FCEV. The Toyota Mirai has been sold in markets in Japan and US for the past seven years but the greatest challenge to the broad-scale introduction of fuel cell electric vehicles in Australia has been a lack of refueling infrastructure. The Toyota Hydrogen Center is a step in addressing this challenge.

Together with the hydrogen production, storage and refuelling facility, the Toyota Hydrogen Center also incorporates an Education Center to provide information on how hydrogen fuel cells work and the benefits to society, helping to dispel any myths around the safety and use of hydrogen as a fuel.

80kg/dy of hydrogen at 33Kwh/kg comes out to 3.33kg per hour for 110kwh equivalent, so around 55% efficiency, which is OK although not brilliant.

But it is on site right where needed, so that is worth a loss of efficiency.

And since they are running it where possible from the solar array, and where needed using a battery to store that with consequently somewhat lower efficiency, then when they need less hydrogen the efficiency would be a touch higher perhaps