Toyota Motor Europe (TME) has become a direct shareholder in EODev (Energy Observer Developments). EODev—along with its partners—is positioning itself as a leading European designer, assembler and distributor zero-emission energy systems on an industrial scale.

In early 2020, EODev and TME Fuel Cell Business integrated Toyota’s leading fuel cell technology in the Energy Observer boat, ahead of its Atlantic and Pacific Ocean crossings. (Earlier post.) This marked Toyota’s expansion into a new business area where it has become a fuel cell technology supplier and integrator. Both companies worked together to develop hydrogen products around the Toyota modular fuel cell system.

EODev’s REXH2 maritime range extender is a hydrogen power solution that can be integrated into different kinds of ships, in full compliance with environmental and regulatory constraints. The land-based GEH2 stationary generator is another example of a zero-emission solution using the Toyota hydrogen technology. 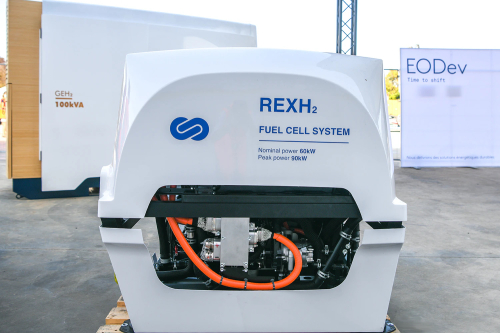 The partnership started in 2017, when Toyota France decided to sponsor the Energy Observer. It is the world's first hydrogen-powered boat, capable of producing its own hydrogen on-board from seawater thanks to solar, wind and hydro power.

I find marine applications interesting as diesel is a pretty bad solution.
Here is the spec sheet for the RH2:

Of course the big limitation is the supply of hydrogen in ports.
Methanol storage and on board reforming would also be preferable.