If fast charging is available, the competitiveness of battery electric trucks compared with diesel trucks can actually improve with larger trucks, according to a new study by Björn Nykvist and Olle Olsson from the Stockholm Environment Institute (SEI).

In a study published in the journal Joule, the two researchers model high-power fast charging for trucks, enabling smaller batteries. They show that the economics of battery electric trucks per ton-kilometer improves with greater weight, driven by increasing load capacity as well as increased energy savings as a function of weight. 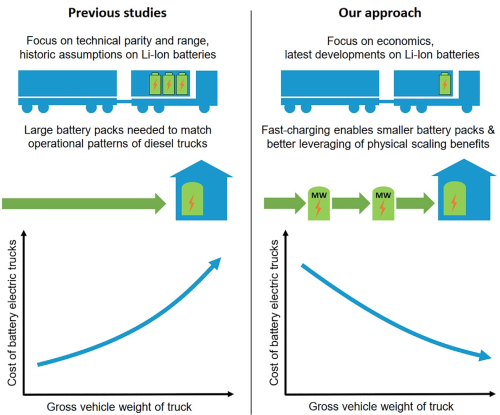 They also show that previous findings that the competitiveness per kilometer is worse for heavy trucks than for lighter trucks are very sensitive to assumptions about the battery cost per kWh and lifetime of the battery pack.

Given the rapid development of batteries, we conclude that the economic feasibility of heavy battery electric trucks might have been generally underestimated.

When costs are modeled per ton-km, then the result is that the competitiveness of electric trucks improves with GVW, independent of assumptions made about the battery pack.

Their model also indicates that if the parameters of PS3 are actually reached, then heavy electric trucks can be competitive in absolute terms both per ton-km and per km.

… contrary to the conclusions previously drawn in the literature, these results suggest that if high-power fast charging is available, thereby allowing for smaller batteries to be used, BEV trucks can be feasible in the heaviest categories. Assuming no or limited fast charging necessitates significantly longer range and, thus, larger batteries.

Brilliant.
Where can I buy these, please?

And I can't see anything in this precis about the ranges assumed.