Scientists from Tohoku University have developed a new fluorine-free calcium (Ca) electrolyte based on a hydrogen (monocarborane) cluster that could potentially realize rechargeable Ca batteries. An open-access paper on the work is published in Nature’s Scientific Reports.

High-energy-density and low-cost calcium (Ca) batteries have been proposed as ‘beyond-Li-ion’ electrochemical energy storage devices. However, they have seen limited progress due to challenges associated with developing electrolytes showing reductive/oxidative stabilities and high ionic conductivities. This paper describes a calcium monocarborane cluster salt in a mixed solvent as a Ca-battery electrolyte with high anodic stability (up to 4 V vs. Ca2+/Ca), high ionic conductivity (4 mS cm−1), and high Coulombic efficiency for Ca plating/stripping at room temperature. The developed electrolyte is a promising candidate for use in room-temperature rechargeable Ca batteries.

The researchers say the new material, achieved by designing the coordination structure of Ca cation with a weakly coordinating anion and mixed solvents, shows markedly improved electrochemical performances such as high conductivity and high electrochemical stabilities. 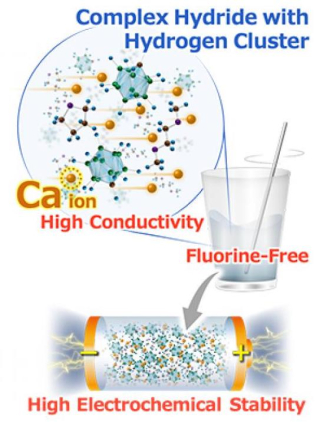 Current lithium-ion (Li-ion) batteries have some drawbacks. They are approaching their demand limits of theoretical energy density and cost, and lithium is not naturally plentiful.

Calcium, however, is the fifth most abundant element in Earth’s crust and its metal anode has low reduction potential (-2.87 V vs. standard hydrogen electrode (SHE)) and volumetric capacities of 2072 mAh cm-3, giving it comparable cell voltage and energy density to those of Li. Calcium batteries are therefore cost-effective and possess high battery performance, making them a suitable substitute for Li-batteries.

Still, many challenges remain before Ca batteries can be realized due to a lack of suitable electrolytes which possess reductive/oxidative stabilities and high ionic conductivities. Moreover, realizing a fluorine-free system is desirable for practical Ca electrolytes because a fluorine-containing electrolyte intrinsically induces CaF2 formation on the electrode, which hinders Ca diffusion as well as the Ca plating and stripping processes.

The Tohoku University research team, which was led by Kazuaki Kisu and Shin-ichi Orimo from the Advanced Institute for Materials Research (AIMR), utilized the hydrogen cluster anion because of its high reductive and oxidative stability, which allows for a wide potential window and demonstrates excellent stability against metal anodes such as Li, Na, and Mg.

A design that incorporates a hydrogen cluster into a Ca electrolyte had not been proposed yet. We were pleased that this turned out suitable for a Ca battery.

The team, which also included Kim Sangryun from the Institute of Materials Research and Kun Zhao and Andreas Züttel from École Polytechnique Fédérale de Lausanne (EPFL) as part of Tohoku University’s Core Research Cluster for Materials Science, envisions this new Ca electrolyte with robust electrochemical performances to be a breakthrough for Ca batteries.

We expect the development of a promising electrolyte candidate based on complex hydrides compatible with Ca batteries will create future opportunities for exploring other related complex hydride compounds such as multivalent electrolytes.