The Auvergne-Rhône-Alpes, Bourgogne-Franche-Comté, Grand Est and Occitanie regions in France have signed the first order for dual-mode electric-hydrogen trains in France. Acting on behalf of the four regions, SNCF Voyageurs has placed an order with Alstom for the first 12 dual mode electric-hydrogen trains (plus two optional trainsets) in the Coradia Polyvalent range for Régiolis, developed by Alstom. The contract is worth a total of almost €190 million (US$226 million). 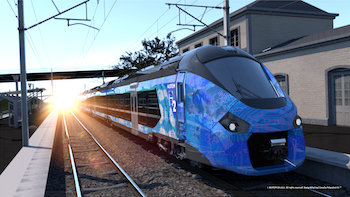 This official French order for hydrogen-powered trains is the result of two years of joint efforts by the project’s various stakeholders. The dual mode electric-hydrogen Coradia Polyvalent train meets the requirements of France’s diverse rail network and has a range of up to 600 km (373 miles) on sections of non-electrified railway. T

The four-car, 72m train has a total capacity of 218 seats and the same dynamic performance and level of comfort as the dual mode electric-diesel version.

Almost 400 dual mode electric-thermal and full-electric Coradia Polyvalent trains have been ordered by French regions since 2011. The development and manufacture of Coradia Polyvalent trains secure over 2,000 jobs in France for Alstom and its suppliers. Six of Alstom’s 15 sites in France are involved in the project: Reichshoffen (Bas-Rhin) for design and assembly, Ornans (Doubs) for engines, Le Creusot (Saône-et-Loire) for bogies, Tarbes (Hautes-Pyrénées) for traction chains and the development of hydrogen propulsion, Villeurbanne (Rhône) for on-board electronics and Saint-Ouen (Seine-Saint-Denis) for design.

France has everything it needs to become a hydrogen champion: the French government is fully committed to turning this ambition into reality. We will be covering 47 million euros of development costs for France’s first regional hydrogen-powered train. I am delighted that this support has enabled the four partner regions to confirm their order for the first 14 trains.

Following the completion of the transaction, the company, renamed ALSTOM Hydrogène S.A.S., will become a wholly owned subsidiary of Alstom. Alstom remains committed to its current suppliers to ensure the smooth running of current offers and projects.