Transportation is becoming a technology industry. Besides having amazing autonomous driving and AI technologies, vehicles will be programmable platforms to offer software-driven services. The business models of transportation will be reinvented. Our design wins demonstrate how NVIDIA is partnering with one of the world’s largest and most impactful industries to help revolutionize the future of mobility.

Volvo Cars. Volvo Cars announced that it will use NVIDIA DRIVE Orin to power the autonomous driving computer in its next-generation cars, extending the companies’ deep collaboration over the last few years. The first car featuring DRIVE Orin technology, the next-generation Volvo XC90, is planned to be revealed next year.

NVIDIA DRIVE Orin’s high-performance, energy-efficient compute will work together with software developed in-house by Volvo Cars and Zenseact, an advanced sensor suite that includes lidar as well as steering and braking backup systems.

The NVIDIA Orin system-on-a-chip (SoC) achieves up to 254 TOPS and is designed to handle the large number of applications and deep neural networks that run simultaneously in autonomous vehicles and robots, while achieving systematic safety standards such as ISO 26262 ASIL-D.

Orin is software-compatible with Xavier, allowing customers to leverage their existing development investments. It’s also scalable&MDASHwith a range of configurations and even able to deliver unsupervised driverless operation.

Volvo Cars’ next-generation vehicle architecture will be hardware-ready for autonomous driving from production start. Its unsupervised autonomous driving feature, called Highway Pilot, will be activated when it’s verified to be safe for individual geographic locations and conditions.

Robotaxis. Zoox recently unveiled its purpose-built robotaxi designed for everyday urban mobility. The vehicle is powered by NVIDIA DRIVE and is one of the first robotaxis featuring bi-directional capabilities, putting the next generation of intelligent transportation into motion.

NEVs. A growing number of automotive startups and EV brands have in recent months announced plans to build software-defined vehicles using NVIDIA DRIVE Orin to deliver continuously improving AI capabilities, beginning as early as next year. They include: 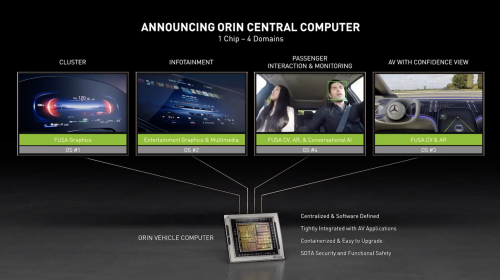 Orin. Vehicle functions have been controlled by tens of electronic control units distributed throughout a vehicle. By centralizing control of these core domains, Orin can replace these components and simplify what has been an incredibly complex supply chain for automakers.

The future is one central —four domains, virtualized and isolated, architected for functional safety and security, software-defined and upgradeable for the life of the car—in addition to super-smart AI and beautiful graphics.

DRIVE Orin supports multiple operating systems, including Linux, QNX and Android, to enable this wide range of applications. As a high-performance compute platform architected for the highest level of safety, it does so in a way that is secure, virtualized and accelerated.

The digital cluster, driver monitoring system and AV confidence view are all crucial to ensuring the safety of a vehicle’s occupants. Each must be functionally secure, with the ability to update each application individually without requiring a system reboot.

DRIVE Orin is designed for software-defined operation, meaning it’s purpose-built to handle these continuous upgrades throughout the life of the vehicle.