When winter storms threaten to make travel dangerous, people often turn to salt, spreading it liberally over highways, streets and sidewalks to melt snow and ice. But a new study led by Sujay Kaushal of the University of Maryland warns that introducing salt into the environment—whether it's for de-icing roads, fertilizing farmland or other purposes—releases toxic chemical cocktails that create a serious and growing global threat to our freshwater supply and human health. 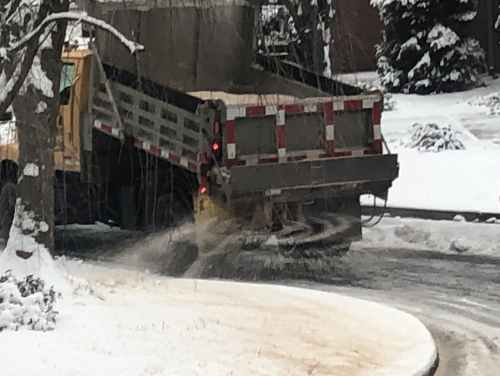 Previous studies by Kaushal and his team showed that added salts in the environment can interact with soils and infrastructure to release a cocktail of metals, dissolved solids and radioactive particles. Kaushal and his team named these cascading effects of introduced salts Freshwater Salinization Syndrome, and it can poison drinking water and cause negative effects on human health, agriculture, infrastructure, wildlife and the stability of ecosystems.

Kaushal’s new study, published in an open-access paper in Biogeochemistry, is the first comprehensive analysis of the complicated and interconnected effects caused by Freshwater Salinization Syndrome (FSS) and their impact on human health. This work suggests that the world’s freshwater supplies could face serious threats at local, regional and global levels if a coordinated management and regulation approach is not applied to human sources of salt. 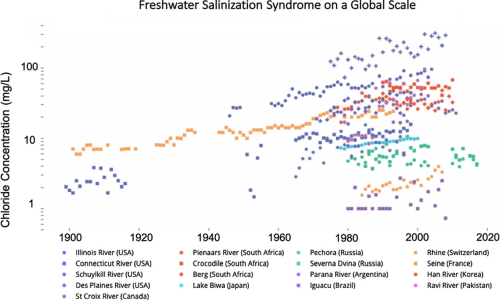 The study calls on regulators to approach salts with the same level of concern as acid rain, loss of biodiversity and other high-profile environmental problems.

We used to think about adding salts as not much of a problem. We thought we put it on the roads in winter and it gets washed away, but we realized that it stuck around and accumulated. Now we’re looking into both the acute exposure risks and the long-term health, environmental, and infrastructure risks of all these chemical cocktails that result from adding salts to the environment, and we’re saying, “This is becoming one of the most serious threats to our freshwater supply.” And it’s happening in many places we look in the United States and around the world.

When Kaushal and his team compared data and reviewed studies from freshwater monitoring stations throughout the world, they found a general increase in chloride concentrations on a global scale. Chloride is the common element in many different types of salts such as sodium chloride (table salt) and calcium chloride (commonly used for road salt). Drilling down into data from targeted regions, they also uncovered a 30-year trend of increasing salinity in places such as the Passaic River in northern New Jersey and a 100-mile-plus stretch of the Potomac River that supplies drinking water to Washington, D.C.

The major human-related salt source in areas such the Northeastern US is road salts, but other sources include sewage leaks and discharges, water softeners, agricultural fertilizers and fracking brines enriched with salts. In addition, indirect sources of salts in freshwater include weathering roads, bridges and buildings, which often contain limestone, concrete or gypsum, all of which release salt as they break down.

Ammonium-based fertilizers can also lead to the release of salts in urban lawns and agricultural fields. In some coastal environments, sea-level rise can be another source of saltwater intrusion.

The study points to a growing body of research from around the world that shows how chemical cocktails released by all of these salt sources harm both natural and built environments. For example, changes in salt levels can allow invasive, more salt-tolerant species to take over a stream. Chemical cocktails released by salts can change the microbes in soil and water, and because microbes are responsible for decay and replenishment of nutrients in an ecosystem, that shift can lead to even more changes in the release of salts, nutrients and heavy metals into the environment.

In the built environment, salts can degrade roadways and infrastructure. They can also corrode water pipes causing the release of heavy metals into drinking water supplies as they did in Flint, Michigan.

I am greatly surprised by the increasing scope and intensity of these problems as highlighted from our studies. Increased salinization of surface waters is becoming a major environmental problem in many places in the world.

The variety of sources and complex interactions between salt and the environment are poorly understood, and every lake, stream and aquifer presents a different set of management challenges. The study suggests that management strategies must evaluate salt contributions from different sources on a watershed-ecosystem level and prioritize regulation accordingly, much the way nutrient loads in watersheds are currently managed.

Improvements in technology have helped reduce nutrient runoff, but safe and effective alternatives to road salts do not yet exist. Kaushal hopes that regulation, new technologies and a coordinated management approach can reduce the potential threats of Freshwater Salinization Syndrome on a broad scale.

Ultimately, we need regulation at the higher levels, and we’re still lacking adequate protection of local jurisdictions and water supplies. We have made dramatic improvements to acid rain and air quality, and we’re trying to address climate change this way. What we need here is a much better understanding of the complicated effects of added salts and regulations based on that. This can allow us to avert a really difficult future for freshwater supplies.

Going forward, the study emphasizes the importance of increasing water monitoring efforts and using modern sensor technology to capture continuous data. High-frequency sensor data allows scientists and managers to detect peaks in salinity and water flow that may eventually help them to predict the chemical composition and accumulation of toxins due to Freshwater Salinization Syndrome.

In addition, Kaushal said field studies and experiments that trace the rapidly expanding effects of salt in the environment are needed to improve scientific understanding of the problem. He has been conducting such research in the streams running through and near UMD’s College Park campus, an urban environment inside the Washington, D.C. Beltway.

This work was supported by Maryland Sea Grant (Award No. SA75281870W), the National Science Foundation (Awards No. EAR 886 1521224, GCR 2021089), Pooled Monitoring Initiative led by the Chesapeake Bay Trust, Water Research Foundation, and the Metropolitan Washington Council of Governments. The content of this article does not necessarily reflect the views of these organizations.

Thanks for sharing this fantastic article. Code and Pixels is Pioneer in designing and developing of IETMs. Code and pixels is the only company in Hyderabad having strong R&D team exclusively for IETM. Code and pixels has executed IETM assignments for Indian Navy, Indian Army and we are approved vendor for DRDO, ASL.