Audi presented the Audi Q4 e-tron (earlier post) and the Audi Q4 Sportback e-tron. These all-electric models represent the brand’s entry into premium e-mobility in the compact segment. Depending on the motor version, they achieve ranges of up to 520 kilometers (323.1 mi) (WLTP), and the top versions come with a maximum output of 220 kW (299 PS) and electric all-wheel drive. An augmented reality head-up display brings a pioneering operating innovation on board on request. 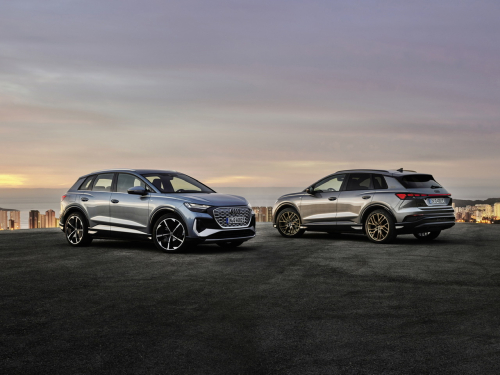 In 2021 the electric offensive is gaining further momentum at Audi. For the first time, more than half of all models newly launched in one year are electric. In this way we are more than doubling the number of our all-electric models, from three to seven. Sustainability is of key importance for us, beyond the power source. That is why we wish to compensate the entire CO2 emissions resulting from the manufacture of the Q4 e-tron models. This means that all vehicles are to be delivered to our customers with a neutral carbon balance sheet. 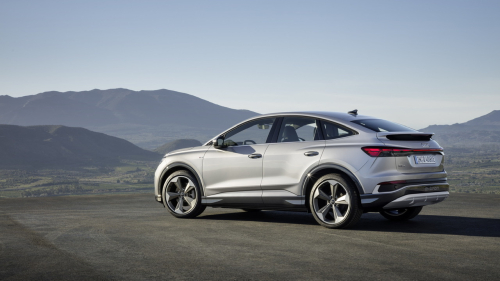 The Audi Q4 e-tron and the Q4 Sportback e-tron are being launched on the European markets with two different battery sizes and three motor line-ups. In the Q4 35 e-tron and Q4 40 e-tron, a permanently excited synchronous machine (PSM) on the rear wheels provides the drive. These two models, along with the R8 V10 RWD high-performance sports car, are the only series-production Audi models with purely rear-wheel drive. The Q4 50 e-tron quattro as the sporty top model uses two electric motors for its electric all-wheel drive. 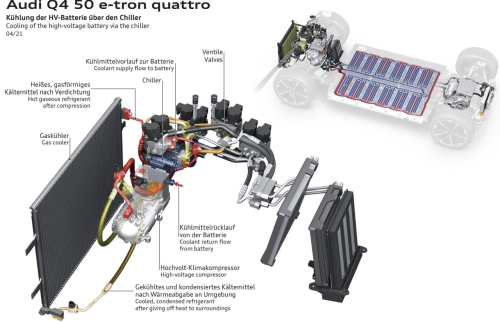 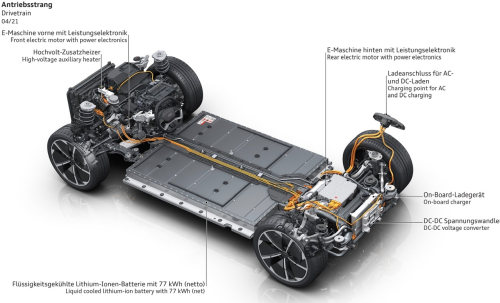 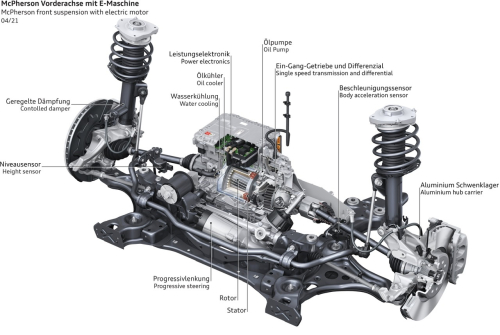 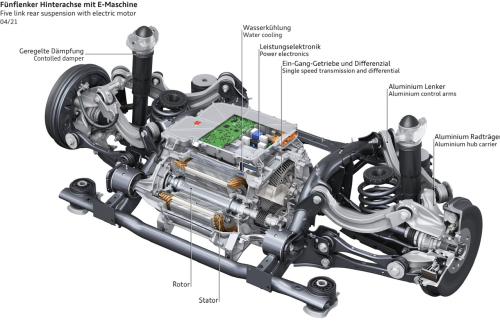 The rear motor generates 150 kW (204 PS) and 310 N·m, the front motor 80 kW (109 PS) and 162 N·m. The electric motors keep reserves available for certain driving situations, which is why the sum of their individual outputs exceeds the drive’s total output.

Both model variants sprint from a standing start to highway speed in 6.2 seconds and continue on to reach a top speed of 180 km/h. They have ranges of up to 488 and 497 (Sportback) kilometers (303 and 309 miles) respectively in WLTP. The average energy consumption for the Q4 50 e-tron quattro in WLTP is 19.9 to 17.9 kWh. The Sportback, which is available optionally with distinctly sporty tires, consumes 20.9 to 17.6 kWh.

Including the transmission and the power electronics, which output the current values at intervals of milliseconds, the water-cooled electric motor weighs only around 90 kilograms. It has a maximum speed of 16,000 rpm. Due to the way in which it works, it also can hardly be heard outside the car—which is why the AVAS (acoustic vehicle alerting system) warning signal that is prescribed by law sounds at low speeds. To start driving, the driver has only to step on the brake and switch to gear D (drive) or B (brake) on the gear selector switch. As soon as they take their foot off the brake pedal, the car starts to roll at low speed.

A major strength of the PSM motor is its efficiency—substantially greater than 90% in the vast majority of driving situations. The motor uses hairpin winding in the stator, making it possible to pack the wire more tightly and to add more copper to the stator. As a result, the output and torque increase.

Electric all-wheel drive. The electric all-wheel drive in the Q4 e-tron top models has an asynchronous motor (ASM) on the front axle that can rev at up to 14,000 rpm. It is installed coaxially and has combined cooling with coolant and oil. The principal advantages of the ASM are its short-term overload capacity and the minimal drag losses when it is inactive. These are important because the front motor does not contribute to the drive in the majority of driving situations for reasons of efficiency. Its one-speed transmission has a ratio of 10.0:1, and the whole unit comes in at around 60 kilograms.

In the electric all-wheel drive, the two electric motors work together with maximum efficiency. During moderate driving, the PSM in the rear works the drive on its own for reasons to do with efficiency and traction. When the driver asks for more power than it can offer, the front electric motor is activated in just a few hundredths of a second. The same happens predictively when driving on slippery roads or cornering at high speed even before the car starts to noticeably understeer or oversteer.

The wheel-selective torque control, a software function, rounds off the work of the electric all-wheel drive with finely metered brake interventions at the wheels under a reduced load on the inside of a curve.

The electric all-wheel drive shows off its strengths very clearly at low coefficients of friction, such as on very wet or snow-covered roads or on a loose surface. High stability, sporty handling, and secure grip give the Q4 e-tron quattro4 a crucial advantage. Following its debut in the Audi e-tron, the electric quattro now makes its way into the compact class.

Coasting and recuperation. When the Audi Q4 e-tron is on the move in gear D (drive) and the driver takes their foot off the accelerator pedal, the drive switches to coasting mode. Both electric motors—or the rear motor in the rear-wheel drive models—run freely and largely without energy. Coasting takes priority, because it is the most efficient.

If the driver prefers recuperation, however, they have a variety of options for this. In gear B (brake), the drive almost always recuperates when coasting but not when the car is at a standstill. The limit is hit at 0.15 g of deceleration. If “dynamic” mode is set in the optional Audi drive select dynamic handling system (standard in the Sportback), recuperation also takes place in gear D but at a slightly weaker rate than in B.

The optional shift paddles on the steering wheel enable the driver to select three different manual recuperation levels in position D: 0.06 g, 0.10 g, and 0.15 g. The driver can also choose automatic recuperation in the MMI system. When the car enters a zone that enforces a lower speed or when it comes up behind a slower car in front, the drive management system attempts to reduce speed by coasting. If the distance available is too short, it switches to coasting recuperation up to a maximum of 0.10 g. For automatic recuperation to cut in, the predictive efficiency assist system must be activated.

When braking, the PSM at the rear alone performs the deceleration in the majority of everyday driving situations. The quattro models can brake electrically at up to almost 0.3 g, equivalent to a recuperation performance of up to 145 kW. The electric brake booster only activates the hydraulic wheel brakes as well if greater deceleration is required. The transition is almost unnoticeable, and recuperation remains active almost until the vehicle is at a standstill. The quattro models prioritize recuperation on the rear axle but also use the front electric motor in a few situations.

Body. Large parts made of hot-formed steel provide the strong backbone of the passenger cell and account for 26% of the weight. They combine a light weight with very high tensile strength and are used everywhere that strong forces have to be absorbed in the event of a collision— in the transition between the longitudinal members and the passenger cell, in the A- and B-pillars, in the roof members, as double cross-bracing under the front seats, and in the side sills. 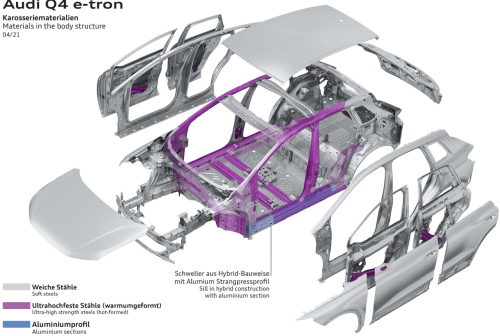 The B-pillars are designed so that they deform more in the lower section than in the upper section in a side impact collision in order to dissipate the energy in a targeted way here. The sills are also given a challenging task: to protect the high-voltage battery.

That is why they are designed in an innovative hybrid construction method: An extruded aluminum section serves as the core, bars inside stiffen it and divide it into several chambers. An outer layer of high-strength hot-formed steel encloses the profile. The aluminum material accounts for just under 10% of the body cell of the Q4 e-tron and the Q4 Sportback e-tron.

The Audi Q4 e-tron and the Q4 Sportback e-tron generate drag coefficients of 0.28 and 0.26 respectively, with the efficiency and range reaping the benefits. One key factor for this is the main section of the body; the greenhouse on both models is drawn in sharply towards the rear.

The adjustable cooling air inlet forms another important factor in the concept. Sitting in front of the package comprising radiator and compressor, which is supplied by the central lower air inlet, is a frame with an electric louver. Depending on the situation, it is opened if the major assemblies require cool air, such as when the vehicle is charging. In the majority of situations, the louver remains closed to minimize the energy losses that occur when air flows through the narrow cooling ducts. The benefit this generates for the range is around six kilometers.

The underbody design of the Q4 e-tron is almost completely smooth. Three-dimensional spoilers in front of the front wheels optimize the airflow; the advantage they give through their aerodynamics adds no less than 14 kilometers to the range. The control arms of the rear axle are partially covered, which means another four kilometers. The underbody ends in a wide diffusor, which reduces the lift of the rear axle.

Detailed solutions, on which the Audi aerodynamics experts have worked closely with the designers, provide another gain in range. At the front of the vehicle, there are narrow vertical bars below the headlights, which act as pre-spoilers and direct the airstream so it flows smoothly along the vehicle’s side. The effect is a gain of five kilometers. A minute step on the exterior mirror housings with a radius of 0.5 millimeters allows the airflow to cling there for longer.

Known as the turbulator edge, this produces a similar effect to the dimples on a golf ball: They allow the air to swirl in a targeted way, which has a positive impact on the aerodynamics and is good for another two kilometers of range.

The 19-inch Aero wheels with their flat designs are likewise optimized to ensure low-loss air flows—a gain of five kilometers. On the Q4 e-tron, the tailgate seal is carefully designed to handle the pressure conditions generated by the roof edge spoiler, which adds four kilometers to the range. The Aero trims, which extend the D-pillars, produce a defined separation of the airflow.

On the Q4 Sportback e-tron, the spoiler sits much lower—low down on the split and steeply raked rear window. The area in which the air swirls as it comes off the vehicle is restricted to the zone beneath the spoiler and is significantly smaller than on the Q4 e-tron. The spoiler solution not only highlights the unique design of the SUV coupés, it also provides around 12 kilometers in range and additionally reduces the lift on the rear axle in a particularly effective way.

Throughout the body, sophisticated insulation measures reduce the transmission of road and tire noise. The large cavities, such as the longitudinal members and the metal roof, contain foam elements, and acoustic capsules made of lightweight foam are fitted above the rear electric motor and at the bulkhead. Parts such as the instrument cross beam, the wheel arches, the pillars, and even the rear bumper are also fitted with insulating and damping elements. The windshield is made as standard of acoustic glass, which can also be used for the front side windows on request. Dark privacy glazing is available for the rear sections as a further option. In the final analysis, Audi’s electric compact SUVs are among the best cars in their class when it comes to the noise level in the interior.