The BMW iX electric SUV (earlier post) has its world premiere at the Auto Shanghai 2021 show. Market launch in China will get underway over the course of 2021. 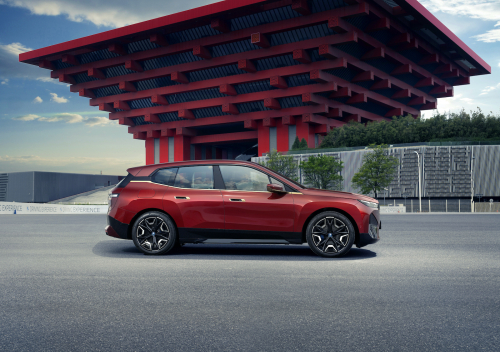 The BMW iX is first model in the brand’s line-up to feature the new Operating System 8 and the latest generation of BMW iDrive. Operating System 8 provides the basis for the seamless integration of additional digital services. The enhanced possibilities for using market-specific apps in China that this enables brings another focal point to BMW’s presentation at Auto Shanghai 2021.

Developed around the BMW Group’s new, modular scalable toolkit as a modern Sports Activity Vehicle (SAV), the new model will be offered in two model variants when it goes on sale in late 2021.

The electric all-wheel drive of the BMW iX xDrive50 channels maximum output of more than 370 kW/500 hp to the road, enabling acceleration of 0 – 100 km/h (62 mph) in under 5.0 seconds, while also posting a range of more than 600 kilometers (373 miles) and power consumption below 21 kWh per 100 kilometers in the WLTP test cycle.

The BMW iX xDrive40 has an output of more than 240 kW/300 hp and completes the sprint from 0 to 100 km/h (62 mph) in a shade over 6.0 seconds. Its range is in excess of 400 kilometers (249 miles) and consumption less than 20.0 kWh per 100 kilometers. (All figures relating to performance, energy consumption and range are predicted values based on the car’s current stage of development.)

The new technology toolkit, making its debut in the BMW iX, also underpins significant advances in the areas of connectivity and digital services. For example, the tech is designed to be able to process 20 times more data than existing models. That means many times more sensor data can be processed. The sensor technology itself is likewise more powerful than ever. The BMW iX is also 5G-capable, enabling fast and reliable transfer of large quantities of data between the vehicle and the BMW Cloud. 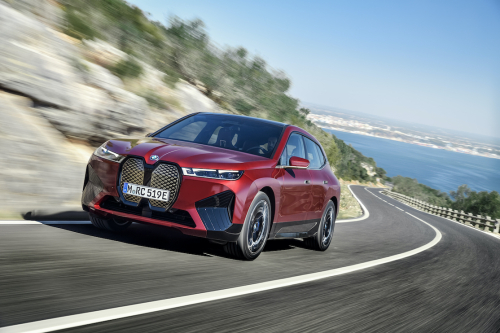 The new generation of BMW iDrive is intended to provide an all-encompassing, intelligent, multi-sensory experience tailored to the driver. A natural dialogue is created between the user and their vehicle with the aim of precisely tailoring all the functions controlled via BMW iDrive to the driver’s needs and preferences as the situation demands.

For many years now, BMW has offered customers around the world extensive integration of digital services from third-party providers via its iDrive system. Market-specific applications and services have also been integrated seamlessly into the vehicle’s operating system. Display and operation here will be familiar to customers from their smartphones. As well as the offerings from Apple and Google, apps relevant to the Chinese market provided by local platforms are also integrated. The introduction of BMW Operating System 8 and the latest iDrive generation takes the integration of services from Chinese platform Tencent, in particular, to a new level.

The Operating System 7 found in existing BMW models already enables integration of applications from Tencent which are extremely popular in China. The key ingredient here is the mini program platform from Tencent, which allows digital services in the areas of communication, travel, entertainment, infotainment, edutainment and gaming to be integrated seamlessly into the vehicle’s operating system. New features presented with the introduction of the latest-generation BMW iDrive include the newly developed integration of digital communication service WeChat.

Like the mini program platform as a whole, the WeChat application is integrated natively into the BMW Operating System. This means the functions included in the WeChat app can be operated in extremely user-friendly fashion via the on-board iDrive system, and are viewed on the BMW Curved Display in the familiar way. The various content is shown according to need and context on the information display or control display in the digital screen grouping. The individual functions can be activated quickly and intuitively via the operating system’s selectable apps menu.

The new integrated applications from Tencent will be available from the launch of the BMW iX in China. The initial range of WeChat functions that can be used comfortably, easily and safely in the vehicle via these applications include WeChat phone calls, voice messaging and sharing of location data, which can then be adopted immediately as a navigation destination. Additional functions and apps will also be integrated into the BMW Operating System and updated using the Tencent mini program platform in the future.