UK-based Nyobolt, the developer of ultra-fast charging niobium-based battery technology, has expanded its global footprint with the opening of its first US office. Backed by Microsoft investor David Marquardt, former CEO of DuPont Marc Doyle, and leading technology investors, William and Andy Matthes, the expansion comes two months after the company closed a $10-million dollar series A funding round.

Serving as the main hub for Nyobolt’s global battery cell development, the Boston-based US team—which combines the expertize of A123 engineers and other leading battery companies—will be responsible for creating the first demonstrative product prototypes for Nyobolt, which are expected to launch later this year.

Our US team will be focused on designing cell sizes to suit a variety of applications and consumer needs, culminating in the launch of our first product prototypes later this year. These will serve to demonstrate our technology’s wide-reaching potential, across applications such as power tools, high performance vehicles, industrial equipment, and consumer devices.

—Mark Newman, CCO and Head of Strategy at Nyobolt

Marc Doyle will also join the company as a board member and Non-Executive Director. Doyle previously spent 25 years at DuPont and was part of the executive team responsible for managing the Dow-DuPont merger in 2017, culminating in the successful IPO of the new DuPont in 2019. His appointment will further strengthen a leadership team that already combines decades of experience at companies including Lotus, Tesla, Samsung and Dyson.

Nyobolt owns the exclusive IP rights to the original niobium anode invention by leading Cambridge University battery scientist Professor Clare Gray; the company now has a presence in the UK, the US and Asia.

In a 2018 paper in Nature, Gray and colleagues reported that two complex niobium tungsten oxides—Nb16W5O55 and Nb18W16O93, which adopt crystallographic shear and bronze-like structures, respectively, can intercalate large quantities of lithium at high rates, even when the sizes of the niobium tungsten oxide particles are of the order of micrometers.

Measurements of lithium-ion diffusion coefficients in both structures revealed room-temperature values several orders of magnitude higher than those in typical electrode materials such as Li4Ti5O12 and LiMn2O4.

In this work, we break from the conventional strategy of nanoscaling and nanostructuring of electrode materials to overcome poor ionic diffusion and electronic properties (found in TiO2 and Li4Ti5O12 for example). We demonstrate that with the appropriate host lattice, none of the usual size, structure or porosity criteria are required to achieve a practical high-rate battery electrode.

Instead, we use insight obtained from previous investigations of complex binary niobium oxides, such as the low-temperature polymorph T-Nb2O5, and of superionic conductors, such as lithium lanthanum titanate perovskite (LLTO), to identify structural motifs that should exhibit favourable Li diffusion properties, and thus superior performance, allowing micrometre-sized particles to be used at extremely high rates. We show that when multi-redox 4d and 5d transition metals are used with the appropriate three-dimensional oxide structure, we can achieve extremely high volumetric energy densities and impressive rates. 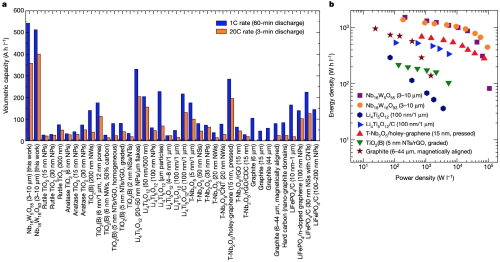 Charge, energy, and power densities of micrometre-sized Nb16W5O55 and Nb18W16O93 compared to state-of-the-art high-rate nanoscale materials and formulations.
a, Nb16W5O55 and Nb18W16O93 charge-storage results are compared to high-rate electrode formulations from the literature. Volumetric capacities at 1C and 20C are determined from reported capacities and from reported, measured or estimated tap densities. The sizes of the primary and, where appropriate, secondary particles or pores are indicated. NP, nanoparticle; NW, nanowire; rGO, reduced graphene oxide; NS, nanosheet; NT, nanotube; CDC, carbide-derived carbon; CNT, carbon nanotube.
b, Ragone (double logarithmic) plot of energy density and power density for anode active materials versus a 4.0-V cathode. The mass loading of the niobium tungsten oxides was 2.6 mg cm−2 and that of the other titanium- and niobium- based materials was about 1 mg cm−2. Graphite is included as a reference, although it suffers from Li plating risks and particle fracture when used at high rates. Griffith et al.