ELYSIS has selected the Alma smelter, operated by Rio Tinto in Saguenay-Lac-Saint-Jean, Québec, for the first installation and demonstration of its inert anode technology at a commercial size of 450 kiloamperes (kA)—a common capacity for modern, full-scale smelters.

ELYSIS is a joint venture company, led by Rio Tinto and Alcoa, that is working to commercialize a new technology to make aluminum that eliminates all direct greenhouse gases (GHGs) from the traditional smelting process and instead produces oxygen. (Earlier post.)

Aluminum production accounts for roughly 1% of global greenhouse-gas emissions each year, via a two~step process: refining of aluminum oxide powder from bauxite ore and conversion to aluminum in smelters. The majority of the GHG emissions come from the smelting process, which uses large amounts of electricity; more than half of its total emissions come indirectly from the electricity production. However, nearly 20% of the emissions are from the production and degradation of the carbon anodes used during smelting.

The conventional Hall–Héroult smelting process (invented in 1886) involves dissolving alumina (Al2O3) in molten cryolite, and electrolyzing the molten salt bath, typically in a purpose-built cell with carbon electrodes. The mixture is electrolyzed by passing a low voltage direct current through it, causing liquid aluminum metal to be deposited at the cathode. Oxygen from the alumina combines with carbon from the anode to produce mostly carbon dioxide. 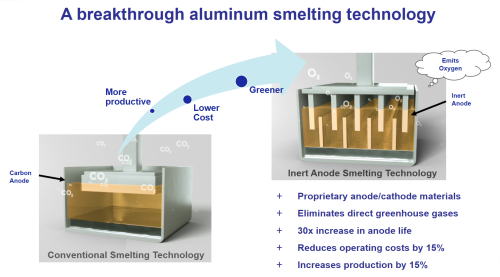 As part of its technology development and scale-up, ELYSIS will install industrial inert anode prototype cells at the end of an existing potline at the Alma smelter to demonstrate the technology’s effectiveness at a commercial scale in an industrial operating environment.

This will build on ongoing work at the nearby ELYSIS Industrial Research and Development Centre, also located in the Saguenay region of Québec. (Earlier post.)

ELYSIS plans to commercialize its technology in 2024 for use in retrofitting existing smelters and installation in new facilities.

The 450 kA cells at Alma will be supported by a $20-million CAD investment from the Government of Québec to help bring forward the start of work at the site and to further strengthen the capability of manufacturing businesses in the region to supply specialized equipment required for the ELYSIS technology.

In Canada alone, the ELYSIS technology has the potential to reduce GHG emissions by 7 million tons, the equivalent of removing 1.8 million cars from the roads.

ELYSIS will sell next-generation anode and cathode materials, which will last more than 30 times longer than traditional components. ELYSIS continues to work closely with the Rio Tinto technology design team in France and Alcoa’s Technical Center, where the zero-carbon smelting technology was invented.

The Rio Tinto technology team in France is creating commercial-scale designs for the ELYSIS technology. Alcoa’s Technical Center supports ELYSIS in the manufacture of proprietary materials for the new anodes and cathodes that are essential to the ELYSIS process.