thyssenkrupp has signed a contract with Illinois-based CF Industries to supply a 20 megawatt alkaline water electrolysis plant to produce green hydrogen at their Donaldsonville, Louisiana, manufacturing complex. The work is expected to begin in the second half of 2021 and finish in 2023. 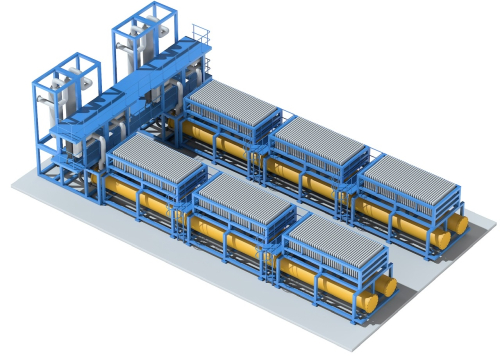 CF Industries will integrate the carbon-free hydrogen generated by the electrolysis plant into existing ammonia synthesis loops to enable the production of 20,000 tons per year of green ammonia. When complete in 2023, the Donaldsonville green ammonia project will be the largest of its kind in North America.

As countries around the world work to reach net-zero carbon emissions by 2050, hydrogen has emerged as a leading source of clean energy. Industry experts project hydrogen will meet approximately 20% of the world’s energy needs by 2050, up from less than 1% today. Ammonia is a critical enabler for the storage and transport of hydrogen and can also be a clean fuel in its own right.

CF Industries, the world’s largest producer of ammonia, is pursuing initiatives to support this clean energy future. These include the production of green ammonia—ammonia produced using hydrogen from carbon-free sources—and blue ammonia—ammonia produced with carbon dioxide removed through carbon capture and sequestration and other certified carbon abatement projects.

The company’s first green ammonia project will be implemented at its Donaldsonville, Louisiana, manufacturing complex. The project will utilize a 20 MW alkaline water electrolyzer developed by thyssenkrupp. The modular electrolyzer technology allows additional units to be added that leverage the Donaldsonville site infrastructure, enabling production to scale in the future.

CF Industries will allocate renewable energy purchased across its network from available grid-connected sources to match 100% of the electricity needed by the electrolyzer to separate water into carbon-free hydrogen and oxygen. The electrolyzer will be integrated into existing ammonia plants at Donaldsonville where atmospheric nitrogen will be fixed with the carbon-free hydrogen to produce green ammonia.