Toyota Motor Corporation is developing a hydrogen combustion engine in an effort to move toward a carbon-neutral mobility society. It has installed the engine—a 1.6L in-line three-cylinder turbo with intercooler—on a racing vehicle based on Toyota’s Corolla Hatchback, which it will enter in competition under the ORC ROOKIE Racing banner. 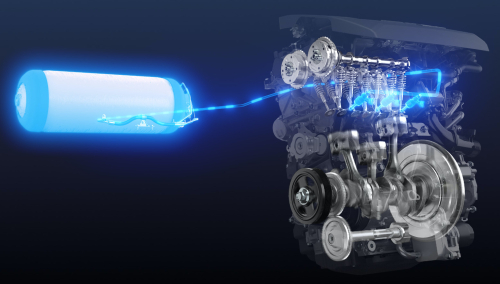 The first race will be the Super Taikyu Series 2021 Powered by Hankook Round 3 NAPAC Fuji Super TEC 24 Hours Race on 21-23 May. By honing its prototype hydrogen engine in the harsh environment of motorsports, Toyota aims to contribute to the realization of a sustainable and prosperous mobility society.

Fuel cell electrified vehicles (FCEVs) such as Toyota’s Mirai use a fuel cell in which hydrogen chemically reacts with oxygen in the air to produce electricity that powers an electric motor. Vehicles with hydrogen engines generate power through the combustion of hydrogen using fuel and injection systems that have been modified from those used with gasoline engines.

Except for the combustion of minute amounts of engine oil during driving, which is also the case with gasoline engines, hydrogen engines emit zero CO2 when in use.

Combustion in hydrogen engines occurs at a faster rate than in gasoline engines, resulting in improved responsiveness. While having excellent environmental performance, hydrogen engines also have the potential to relay the fun of driving, including through sounds and vibrations, Toyota says.

Toyota has long engaged in the innovation of engine technology. It is also applying the technologies that it has continued to refine through its participation in motorsports to production vehicles, with the GR Yaris launched last September being one example.

Toyota intends to apply the hydrogen safety technologies and know-how that it has accumulated through the development of fuel cell vehicles and the commercialization of the Mirai.

Plans are for the hydrogen-engine-powered race vehicle to be fueled during races using hydrogen produced at the Fukushima Hydrogen Energy Research Field in Namie Town, Fukushima Prefecture. While aiming to expand hydrogen infrastructure by promoting hydrogen use, Toyota intends to continue advancing efforts for economic recovery and revitalization of the Tohoku region together with all parties concerned.

Toyota has been strengthening its efforts toward achieving carbon neutrality by aiming to promote the use of hydrogen through the popularization of FCEVs and numerous other fuel-cell-powered products. By further refining its hydrogen-engine technologies through motorsports, Toyota intends to aim for the realization of an even better hydrogen-based society.

A H2 combustion engine! ?? BMW attempted that fervently in the seventies and failed miserably. H2 is highly inflammable and has its dangers. At any rate, BMW determined that a H2 combustion engine is craps. More than likely, the invested time is lost as well as money. Astonishing advancement has been achieved in battery technology since the seventies. At least half a dozen newest battery solutions to emerge in the market in the near future will wipe out any remaining fears / doubts presently hampering the switch to EVs.

' H2 is highly inflammable and has its dangers'

Hydrogen fires don't take 4 hours and thousands of gallons of water to put out, with that water then contaminating the groundwater to dangerous levels.

That is exactly what the latest fire in a Tesla did.

And here is the buried lede "hydrogen engines also have the potential to relay the fun of driving, including through sounds and vibrations, Toyota says." This is why electric motorcycle engines will never make it into Harleys. For certain classes of vehicle, NVH is a feature, not a bug.

This is why electric motorcycle engines will never make it into Harleys.

Have you heard about the Harley Davidson Livewire Electric Motorcycle. Though expensive, it is an excellent motorbike. Also, if you want the "Harley Sound" no problem, just add the optional speakers.
Read about the sound in this Ride Apart article "Harley Announces Livewire To Offer Customizable Note Option" from April 01, 2019.
"The system will use a compact “engine sound system” that will use two speakers located on the tail of the bike to produce the artificial engine sound. The system will be synched with the throttle input, which means the bike will mimic the sound of an engine at idle and increase the “revolutions” as soon as the throttle is twisted.
Harley confirmed that, of course, the note of its famous Milwaukee-Eight will be listed among the possible options."

The fuel efficiency of the BMW ICE using hydrogen was lousy.
There was no point continuing with it as fuel cells dropped in cost - they get great economy.

Of course, it is a very different thing for a racing car, which is what this is about.

H2 in ICEs is an excellent idea for aircraft jet engines and sea ships, not so much for replacing gassers.
HD motorcycles are also an excellent platform for electric motors, especially without the obnoxious noise. If you want noise, wear earphones and pipe it into your own brain, not others.

As @Davemart points out this is a "racing car" engine and as @AlbertEShort points out, "While having excellent environmental performance, hydrogen engines also have the potential to relay the fun of driving, including through sounds and vibrations, Toyota says."
A 3 cylinder, 1.6 liter ICE could produce 400 hp (300 kW) and would weigh less than 50 kg (BTW Nissan did this in 2014). Add the 272 hp electric FWD and you have the same total power allowed for WEC LeMans racing for 2021.
For 2024, LeMans will have MissionH24 allowing 3 H2 tanks (currently 8 kg H2). Red Bull Advanced Technologies (RBAT) and ORECA will collaborate on the chassis concept that will underpin all the prototypes in the future Hydrogen class at the 2024 24 Hours of Le Mans. (reference:https://www.24h-lemans.com/en/news/red-bull-advanced-technologies-and-oreca-to-supply-hydrogen-class-chassis-in-2024-54756).
Maybe by then the Kubas Manganese Hydride tanks will be ready allowing twice the range. Interesting developments for clean air racing.

"If you want noise, wear earphones and pipe it into your own brain, not others. "
In some instances that could prove to be a difficult task. To "pipe it" to the target you mentioned, it would have to be verified that it is there in the first place or else you just "pipe it" perhaps into a vacuum?

More WEC Racing Details (explaining the 272 hp FWD):
The Toyota Gazoo GR010 HYBRID incorporates a powerful four-wheel drive racing hybrid powertrain, with a 3.5litre V6 twin turbo engine, providing 680PS to the rear wheels and combining with a 272PS motor generator unit, developed by AISIN on the front axle.
Also, current WEC LeMans rules allow 62.5 liters of gasoline for Hybrid racers. That is 16.5 gallons and would be equivalent to 16.5 kg of H2. So Kubas Manganese Hydride tanks would equal the gasoline tanks.