Orocobre Limited and Galaxy Resources have entered into a binding Merger Implementation Deed (MID) under which Orocobre will acquire 100% of the shares in Galaxy. The resulting company will have a A$4-billion (US$3.1-billion) market capitalization, making it the fifth-largest by capitalization. 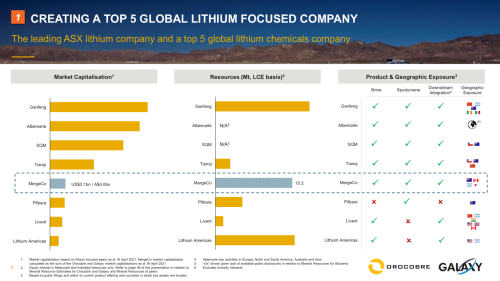 The merged entity will also be the fifth-largest lithium company by production according to Benchmark’s Lithium Forecast, with Orocobre and Galaxy’s active assets delivering a combined capacity of around 35,000 tpa LCE.

A new name for the merged entity will be selected in due course representing the global reach of the new entity, which will have its head office in Buenos Aires, Argentina, a corporate headquarters on the Australian East Coast and an office in Perth.

The merged company will have a highly complementary portfolio of assets delivering geographical and product diversification across brine, hard rock and vertical integration across the supply chain.

The merged entity’s growth opportunities in both brine and hard rock position it uniquely to take advantage of expected rising EV demand for lithium.

Company management anticipates robust demand for lithium in the mid-long term. Chinese spot lithium carbonate prices have jumped 90% between December 2020 and end March 2021. Li chemical inventories have decreased faster than expected, the companies said, but there currently is a looming structural deficit as current pricing is insufficient to incentivise new projects.

EV demand is the key driver, as demand is rising sharply in both Chinese and non-Chinese markets, the companies said. 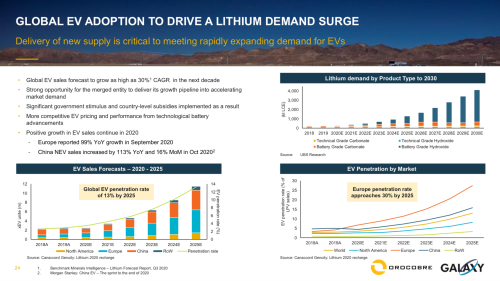