In the first quarter of 2021, hybrid electric vehicles made up 18.4% of total passenger car sales in the EU, almost doubling their market share in a year, according to data from the European Association of Automobile Manufacturers (ACEA). Demand for electrically-chargeable cars also increased in Q1: battery-electric vehicles made up 5.7% of all new cars, while plug-in hybrids accounted for 8.2% of EU registrations.

Sales of traditional fossil-fuel cars continued to decrease in the European Union, although gasoline and diesel still made up 65.4% of the car market. 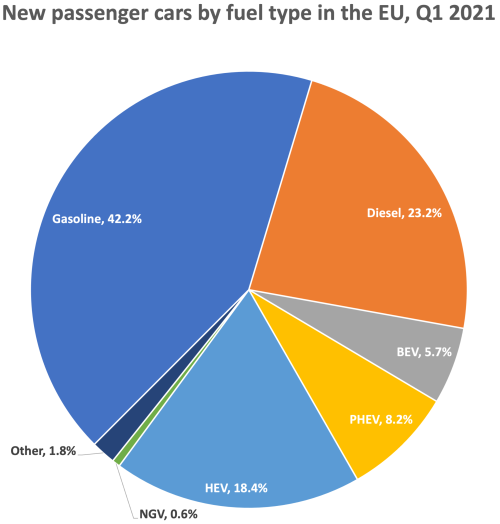 Alternatively-powered vehicles (APV). During the first quarter of the year, registrations of battery-electric vehicles (BEVs) in the EU increased by 59.1% to reach 146,185 cars, with demand still benefiting from government stimuli for zero-emission vehicles. This growth was spurred by big gains in key EU markets, most notably in Germany (+149.0%) and Italy (+145.6%). By contrast, demand for battery electric cars declined in Spain (-12.6%) from January to March.

Demand for natural gas vehicles (NGVs) in the European Union declined by 10.1% to 14,300 units during the first quarter, despite registrations increasing by 24.5% in Italy (the largest EU market for these vehicles). Sales of LPG-fuelled cars, on the other hand, almost doubled (+92.7%) to reach 46,037 units, boosted by remarkable gains in France (+1,748.6%; now the second largest EU market for LPG cars) and Italy (+23.9%), which accounted for more than half of total LPG sales.