Fuel tankering in commercial aviation is the practice of overfueling with less expensive fuel purchased at one airport to avoid purchasing more expensive fuel at another—in other words, flying with extra fuel on board to save money. Calculating the benefit of tankering is highly flight-specific; extra fuel increases the takeoff mass of the plane, and results in a fuel burn penalty proportional to the flight distance. Nevertheless, the practice is common. Businesses have developed calculators to assist in determining tankering go/no-go benefits, and aircraft manufacturers such as Gulfstream provide guidance as well.

In a new study, a team from the International Council on Clean Transportation (ICCT) concludes that tankering saves airlines money, but increases systemwide fuel use and emissions and could reduce sales of sustainable aviation fuel (SAF) under a mandate.

The European Union (EU) mandate under development would require jet fuel providers to blend an increasing share of SAF into their fuel supply at EU airports starting in 2025.

Most tankering occurs on short-haul flights because savings from purchasing cheaper fuel at one airport become offset as stage length increases. For the foreseeable future, SAFs are expected to cost substantially more than fossil jet fuel. This means that airlines operating flights to and from mandated airports in Europe may have an incentive to tanker fuel on flights into the EU to avoid purchasing SAF blends. This would save airlines money, but increase the use of fossil jet fuel and reduce SAF sales within the European Union.

Using the ICCT’s own Global Aviation Carbon Assessment (GACA) model, the researchers estimated the potential emissions and fuel sales impacts of tankering on flights arriving at EU airports through 2035. GACA models fuel burn by airport-airport pair, airline, and aircraft type for a given calendar year. The researchers analyzed 2019, the last year of normal operations before the impact of COVID-19, using operations data from the Official Airline Guide (OAG). Only passenger flights were analyzed.

Average fuel burn penalty across aircraft classes at increasing flight distances was derived, and then linearly regressed against stage length. Partial tankering (e.g., carrying half of the fuel needed for a return trip) was not analyzed in this paper.

The results showed that tankering should be minimal in 2025—11% on international flights and 5% on all flights—due to the low cost of the expected 2% SAF mandate. However, the ICCT team expects significant tankering by 2030, when almost two-thirds of international flights, or a quarter of all flights within and into the European Union, are expected to carry excess fuel.

This share rises to almost 80% of international flights and a third of all flights to and from EU airports as the SAF mandate escalates in 2035.

While almost 80% of international flights would be expected to tanker by 2035, excess emissions remain modest compared to all emissions from flights to and from EU airports; this is because most flights that tanker will be short-haul. We expect near-zero fuel and CO2 increase in 2025, less than 1 Mt of CO2 (0.3% of all emissions) in 2030, and then rising to 2.4 Mt (0.9% of all emissions) in 2035. However, when combined with foregone SAF sales at EU airports, the combined emissions impact of tankering could be substantial. Assuming an 80% reduction in life-cycle CO2 emissions from SAFs, tankering could cause well-to-wake (WTW) emission reductions from the SAF mandate to fall by about one quarter, or 25% and 27%, in 2030 and 2035, respectively.

… Starting in 2030, tankering would have a material impact on mandated SAF sales under the system, reducing sales at EU airports by up to 1.85 Mt in 2035, or 22% below the hypothetical case where no tankering occurs. Savings for airlines due to tankering could reach €2.3 billion in 2035 after taking into account excess fuel burn and EU ETS costs. Thus, while the emissions impacts of tankering would be small, SAF sales themselves could fall substantially. 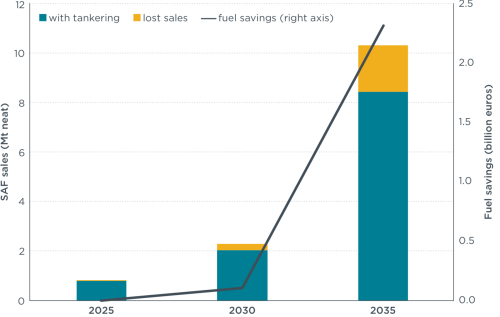 The authors of the ICCT paper suggest three possible approaches to reduce tankering to support SAF sales and safeguard the integrity of SAF mandates in Europe:

A clear and fair definition of tankering would be needed before any regulations could be imposed.

Much additional work on takering is required, the ICCT team said, as the current study is only an introductory review based on broad assumptions and limitations.