Moscow is already the largest operator of electric buses in Europe with 600 e-buses in operation on its routes. The city plans to purchase another 1600 electric buses over next few years, with the goal of replacing the diesel fleet.

Now, Russia-based heavy-duty truck vehicle manufacturer KAMAZ has opened a center to produce electric buses in Moscow. The production site is located on the territory of the Sokolniki Car Repair and Construction Plant (SVARZ)—a branch of the State Unitary Enterprise Mosgortrans. 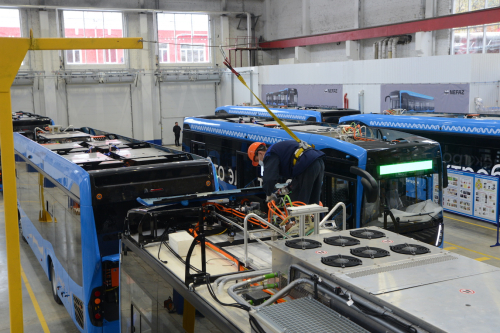 An assembly line designed to produce up to 500 electric buses per year will operate at SVARZ as the first stage.

At the second stage KAMAZ will reconstruct another production building with an area of about 3,000 square meters, which will allow to manufacture about 200 more electric buses per year and carry out service of equipment.

SVARZ will become one of the largest centers for the production and maintenance of electric vehicles in Russia, producing up to 700 electric buses annually.

To prepare for mass production, 11 test electric buses have already been manufactured at SVARZ; 5 of them have passed a full run-in and a leak test in a special sprinkler chamber. This May they will be launched to the streets of Moscow.