Raven SR, a renewable fuels company, and Hyzon Motors Inc., a global supplier of hydrogen fuel cell-powered commercial vehicles, announced a joint venture to build up to 100 hydrogen hubs across the United States and globally. As part of the agreement, Hyzon is acquiring a minority interest in Raven SR.

The first hubs will be built in the San Francisco Bay Area and are expected to be commissioned in 2022; Hyzon and Raven will then expand into the rest of the US and globally. At the hubs, which can be built at or near landfills, Raven SR will convert mixed and multiple organic wastes, including municipal solid waste, greenwaste, food waste, medical, paper, etc. into locally produced, renewable hydrogen for Hyzon’s fleet of zero-emission commercial vehicles.

Raven SR’s patented, Steam/CO2 Reformation process enables it to be one of the only combustion-free, waste-to-hydrogen processes in the world.

Raven supplies all the needed endothermic heat from sources outside of the reformer by recycling waste heat and/or electrical heat up to 1,200°F (649 ˚C). Raven can also control the temperature gradient along the axis of the rotary reformer from 300 °F (149 ˚C) at the front up to 1,200°F at the exit end. This permits the control of the rotary reformer when there is water content or chemical makeup variation in the feedstock, such as in MSW. Careful temperature control prevents glass and metals from melting and becoming slag, and produces a biocarbon which is a salable product. As a non-combustion process, there is no ash, no slag, build up, or hotspots in the equipment.

Raven can also add small amounts of CO2 to adjust the H2/CO ratio in the process that is needed for FT fuel production.

Raven’s technology dependably converts mixed carbonaceous waste into consistent hydrogen-rich syngas which then produces more hydrogen per ton of waste than other processes. Raven can also easily process natural and renewable gases alone or combined with solid waste. Our process eliminates waste from going into the landfill, and together with HYZON’s fleets will eliminate emissions pollution.

Each hub will house a Raven SR production unit that is approximately the size of two semi-truck trailers.  The initial hubs are expected to process 50 tons of solid waste per day, which will yield up to 4.5 tons of renewable green hydrogen, enough to power 100 heavy-duty commercial vehicles. 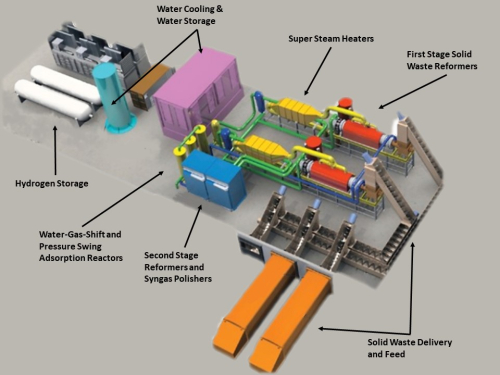 Future hubs can scale to be three times larger to accommodate sites with larger hydrogen requirements. In California, it is expected that the projects will have a carbon emissions profile that will generate high LCFS credits, allowing Hyzon to operate vehicles at very competitive prices.

As more hydrogen hubs are built across the country and internationally, Hyzon will provide their customers with a complete zero-emission mobility solution—from hydrogen-powered vehicles to on-site or locally produced low cost clean-hydrogen.

Hyzon aims to be one of the first companies to supply our customers with a hydrogen fuel cell truck, including our own garbage trucks, at total cost of ownership (TCO) parity with diesel-powered commercial vehicles. With our leading fuel cell technology, we are working closely with partners to scale up hydrogen production in the US and globally. In Raven, we see a technology that is highly efficient in waste conversion, scalable and mobile, enjoying a low cost of hydrogen and most importantly, capable of producing the quantity of green hydrogen that our vehicles will need. One hundred hydrogen hubs could convert over 5,000 tons of waste per day and power over 10,000 trucks.

Much of the discussion regarding the supposed inefficiencies of the hydrogen supply chain ignore that many of the sources use otherwise discarded resources.

If you were going to chuck it away otherwise, that is pretty good efficiency if you use it instead.

I like the concept of not sending material to a landfill but 50 tons/day (or even 150 tons/day) is a really small amount. Maybe 4 to 6 or 7 truckloads for 50 tons. Article does say anything about the cost of the hydrogen. I also think that it would be better to use the hydrogen for commercial products such as ammonia.

Whatever happened to all of the groups that were going to use plasma to transform trash to ethanol, etc.?

@sd There are enormous amounts of waste available, I saw something or the other about enough to theoretically replace 25% of oil, so it is not either/or.

The ammonia market is enormously competitive, and they can ship it from cheap production centres.

The advantage of using waste site hydrogen is that they are all over the place, and so can provide local green hydrogen for trucking depots.

If you create a ongoing hydrogen fuel demand, the question becomes can you keep up using waste products as feedstock or will you need to use fossil fuels as feedstock for the reform process? The best solution would be to use hydrolysis to back up the hydrogen demand or else you are falling into the trap the oil companies are plotting, i.e., using fossil fuel feedstock for the reforming process and promoting the gasoline station model using hydrogen.