A pre-prototype seabed polymetallic nodule (earlier post) collector being tested on the Pacific Ocean floor by Global Sea Mineral Resources (GSR) has become detached from its lifting cable on its final dive and is sitting on the ocean bed 4.5 kilometers beneath the surface. GSR, the in-house deep-sea exploration and exploitation division of global dredging company DEME Group, said that operations to reconnect the lifting point have begun.

GSR began testing the Patania II earlier this month in its concession in the Clarion Clipperton Zone. The trial of the 25-tonne mining robot prototype is being observed by scientists from 29 European institutes. 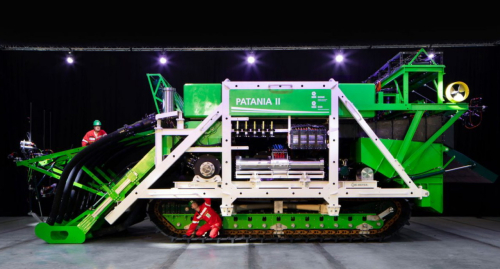 This sea trial, which successfully returned nodules on an earlier dive, is a world-first. The data and samples collected during the trial will expand understanding of the real-world environmental effects of collecting nodules. To date, scientists have had to rely solely on hypotheses, less realistic field and laboratory simulations and computer models.

Patania II, named after the world’s fastest caterpillar, is a 25-ton ultra-deepwater robot on tracks. It was successfully deployed for the first time 18 April 2021. The robot was lowered from a surface vessel via a 5km power and two-way communications cable in an operation that took 4 hours. On 20 April 2021, after approximately 50 hrs on the seabed, Patania II was successfully returned to the vessel.

On the seafloor, Patania II demonstrated its ability to traverse the seabed, collecting nodules as it moved. The nodule collection system consists of a collector head, jet water pumps and a collection drum, while sensors monitored the entire process. On this mission, Patania II is not connected to a riser pipe to bring the nodules to the surface, only the seafloor nodule collector is being tested and monitored at this stage. 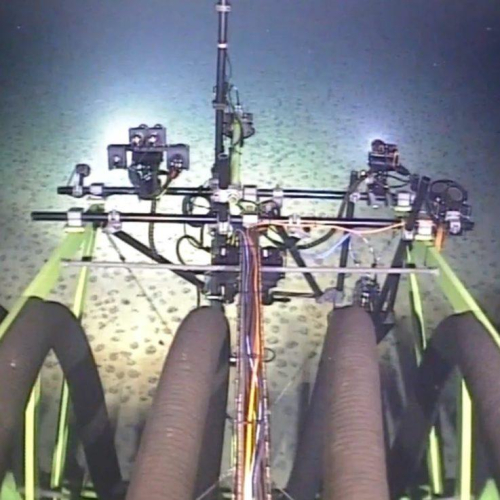 The next mission—planned for 2024—will see a system integration test consisting of a full-scale prototype seafloor nodule collector along with a riser to bring the nodules to the surface. Learnings from the Patania II trial will be incorporated into the next phase.

The first deployment and functionality check of Patania II was followed by additional sortees in the Belgian and German contract areas of the Clarion Clipperton Zone (CCZ). The CCZ is a six million square kilometer region of the Pacific Ocean between Mexico and Hawaii.

The deep seabed minerals industry remains in the exploration, research and development phase. Over the coming years GSR will ensure that the necessary detailed scientific work is carried out before any commercial activity takes place.

It is estimated that ocean-floor polymetallic nodules contain more nickel, cobalt and manganese than in all land-based reserves combined. These metals are vital for the infrastructure required to accommodate an urban population forecast to grow by 2.3 billion by the 2060s. According to some estimates, the world’s building stock will double by 2060, which equals building a city the size of New York City every month for 40 years. Furthermore, the deployment of clean energy technologies such as electric vehicle batteries and wind turbines will only widen the supply gap.

GSR acknowledges that before deep seabed mining occurs at a commercial scale, it needs to be clearly demonstrated that such activities can be managed in a way that ensures the effective protection of the marine environment.

Recent reports have suggested that some automotive brands have ruled out the use of seabed minerals in their supply chains. They haven’t. They have simply said that the risks of deep sea mining need to be comprehensively understood first. We agree and that is exactly what trials like the current one will help to achieve.

GSR is collaborating with the European research project MiningImpact. Scientists from 29 European institutes are joining efforts with the German exploration contract holder, BGR (Federal Institute for Geosciences and Natural Resources), to monitor the trials independently to help understand the environmental effects of collecting mineral resources from the seafloor.

The studies being conducted by the MiningImpact consortium will not only address the direct effects of collecting polymetallic nodules, but also those of the sediment plume created by the process. The data will provide information on ecosystem effects of potential future mining that cannot be drawn from the small-scale experiments conducted in the past.

Among the specialized instruments that were deployed during the expedition are two remotely-operated vehicles (ROV), two autonomous underwater vehicles (AUV), in situ oxygen profilers and experiment chambers, in situ pumps, as well as 50 inter-calibrated hydro-acoustic and optical sensors for measuring the suspended sediment concentrations and particle sizes.