Umicore and Anglo American, through its PGMs business Anglo American Platinum, announced a research and development collaboration agreement to develop platinum group metal PGM-based catalysts for liquid organic hydrogen carrier (LOHC) applications on fuel cell electric vehicles (FCEVs) and other mobile applications. This catalyst technology has the potential to transform the way hydrogen can be stored and used to power FCEVs.

Today, compressed hydrogen is used to power FCEVs. Insufficient infrastructure and refueling networks for compressed hydrogen, however, represent one of the main barriers for a more widespread use of hydrogen in the transportation industry. LOHC technologies provide an effective alternative solution by chemically bonding hydrogen to a stable organic liquid carrier, thereby eliminating the need for compression and making it safer, more practical and more cost efficient to transport hydrogen using existing conventional fuel networks.

The joint research and development program targets new PGM-based catalyst technologies for LOHC, that can be installed directly on FCEVs and other mobile applications.

This will help to further simplify the fueling process: the LOHC containing hydrogen can be unloaded directly on the FCEV and the dehydrogenation phase will be carried out onboard the vehicle. The new catalyst technologies will allow to carry out this dehydrogenation step at lower temperatures and pressures, which is required for mobile applications, thereby providing a simpler and cheaper alternative to onboard storage of compressed hydrogen. 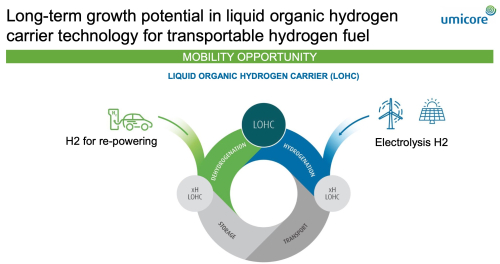 There is growing enthusiasm for the role that hydrogen can play in tackling global energy challenges. In order to unlock its full renewable energy potential, however, we need to solve the existing transport, logistics and infrastructure challenges. LOHC technology provides a versatile and attractive solution both for the short and long term future, and PGMs have an important role to play in streamlining logistics, offering a better user experience and reducing cost across the entire value chain.

Umicore will conduct the research with support from Anglo American’s PGM market development program and in cooperation with Prof. Peter Wasserscheid at the University of Erlangen, co-founder of the company Hydrogenious LOHC Technologies, which is a portfolio company of AP Ventures.

Umicore already produces catalysts for the cathode and anode electrode of PEM fuel cells. The company is supplier and co-developer of PEM fuel cell catalysts with Hyundai Motor Company since September 2009, providing the high performance and durability catalyst requirements.