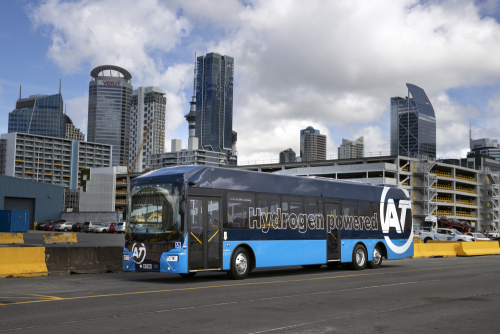 The bus was built by Global Bus Ventures in Christchurch and will be operated with Howick and Eastern Buses by Transdev for the initial two-year trial. The bus is fitted with a Ballard fuel cell and ZF drive system. It has a range of some 400 km (249 miles).

The bus will be refuelled at the Ports of Auckland with green hydrogen.

The trial will cost $1.175 million. The estimated cost of the full transition to zero-emission buses (including EV and hydrogen) is expected to cost between $150 million to $200 million.

Auckland Council had earlier committed to stop buying new diesel buses from 2021—four years earlier than its initial target. Auckland Transport has also advanced its zero-emissions target from its vehicle exhausts to 2030, from an earlier target of 2040, subject to council funding.

It is a big step to begin this test of a transport that uses hydrogen. I hope it is successfully fulfilled and they can expand with more zero-emission, environmentally friendly buses. - Gustavo Copelmayer, Director of Strategic Development