Researchers at Xi’an Jiaotong University in China have developed a Na-ion direct formate fuel cell to co-produce electricity and hydrogen (e-h2 Na-DFFC). A paper on their work is published in the Journal of Power Sources. 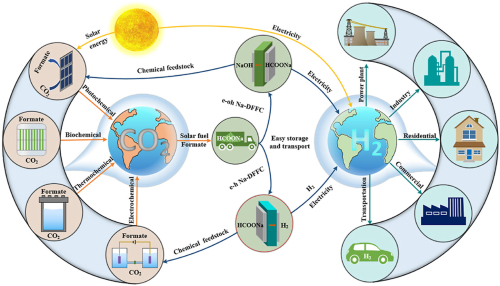 More importantly, the approximate 100% purity and over 98.9% Faradic efficiency suggest the great potential of this electricity-hydrogen co-production device. … This proposed e-h2 Na-DFFC provides a new pathway for renewable hydrogen production.

The hydrogen that is produced from the e-h2 Na-DFFC can be directly fed to hydrogen-oxygen fuel cell, which presents a peak power density of 546 mW cm−2 and 35 hours of stable operation at room temperature.