Home About Contact RSS GCC Twitter Newsletter
IDTechEx: Shift to EVs and autonomy to drive printed electronics automotive market to $12.7B by 2031
BASF and Umicore enter into a patent cross-license agreement covering cathode materials and precursors

In 2020, Tesla deployed 18,700 tonnes of LCE onto roads globally in the batteries of its newly sold passenger EVs, more than the next four EV makers (BYD, VW, Renault and Audi) combined, according to data from Adamas Intelligence’s EV Battery Capacity and Battery Metals Tracker. At the group level (rather than make), Tesla consumed more lithium than the next two groups combined—Volkswagen and BYD—respectively.

Lithium Hydroxide leads but Lithium Carbonate making inroads. Through the first three quarters of 2020, 100% of Tesla’s lithium consumption was in the form of lithium hydroxide. 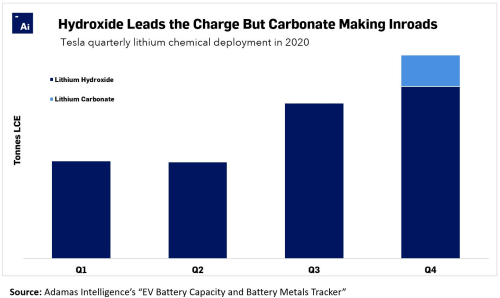 However, with the release of the made-in-China Model 3 Standard Range powered by LFP cells from CATL in the fourth quarter of 2020, this share dropped to 84%, according to Adamas Intelligence data.