The company In-der-City-Bus, which is in charge of public transport in Frankfurt, Germany, has awarded a tender for 13 hydrogen buses to Solaris. The Solaris Urbino 12 hydrogen buses are to be deployed on target routes in 2022. 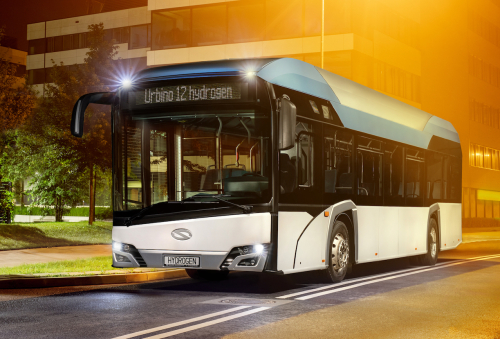 The Urbino hydrogen buses are powered by a 70 kW fuel cell stack. Electric power is transferred directly to the driveline, consisting of an axle with electric motors. Each bus will also be fitted with a Solaris High Power battery. The hydrogen needed to propel the bus will be stored in gaseous form, in roof-stacked tanks.

The Solaris Urbino 12 hydrogen buses will be fitted with a range of Advanced Driver Assistance System (ADAS) solutions that support the driver’s work, including the MirrorEye system in which cameras replace conventional side mirrors thus improving road visibility for the driver. The camera view is transmitted to the in-vehicle displays.

The screens can also show distance indicator lines for various parts of the bus, for example its rear, particular doors or the axles, which will make it easier and safer for the driver to maneuver and to park.

The first Urbino hydrogen models are already cruising on European streets, and dozens more of these buses have been already ordered by carriers in Germany, Italy, Austria and the Netherlands.