EPIC is California’s premier clean energy research and development program. Each year, more than $130 million in EPIC funding is invested in projects that advance the environmental sustainability, reliability, and affordability of the electric system.

EPIC funds are competitively awarded to support the most promising technologies and approaches across six investment areas: the entrepreneurial ecosystem; resilience and safety; building decarbonization; grid decarbonization and decentralization; industrial and agricultural innovation; and low-carbon transportation. EPIC invests in technologies at every stage of development, progressing them from the lab to market competition. 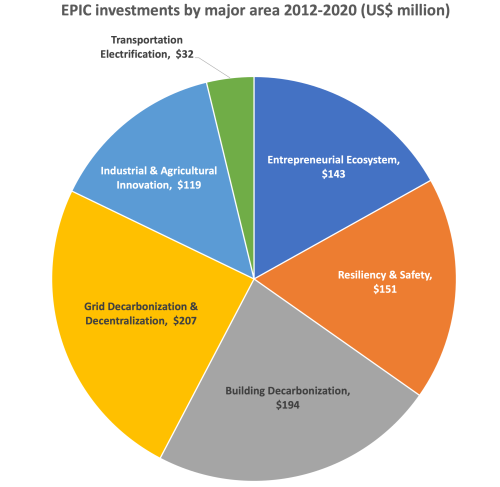 Grid resiliency is a focus for EPIC investments. Generally, resiliency refers to efforts to minimize negative impacts to the grid caused by climate, environmental, and other types of threats. Of particular concern to California are the impacts of extreme weather events and wildfires on the grid.

Since 2012, EPIC has invested more than $151 million to benefit communities, businesses, and public agencies by advancing breakthrough technology solutions and tools to build a safe and resilient energy system. EPIC-funded microgrids, such as those at three Fremont fire stations in Alameda County, have proven their worth by keeping essential and emergency services running even during power outages.

EPIC funding has also been invested in demand response and load flexibility technologies such as energy storage.

Lithium-ion battery storage is the most prevalent technology in use today, but it has limitations including duration. Research, however, is underway on non-lithium-ion technologies capable of providing up to 20 times the duration of lithium-ion-based counterparts. Last year, the CEC invested $43 million in EPIC funds for non-lithium energy storage demonstration projects.

There are a number of emerging storage technologies that are worth looking at that could eventually be alternatives to lithium-ion batteries. We believe they'll be able to provide a better, more affordable, and safer product, but we have to first prove that.

Although EPIC-funded projects can be found throughout the state, the CEC is committed to ensuring all Californians benefit from the state’s energy transformation. Through 2020, more than 65% of EPIC technology demonstration and deployment funds have been invested in projects with demonstration sites in low income and disadvantaged communities. That number increases to 68% when projects benefitting California Native American tribes are included.

The EPIC program was renewed by the California Public Utilities Commission last year.