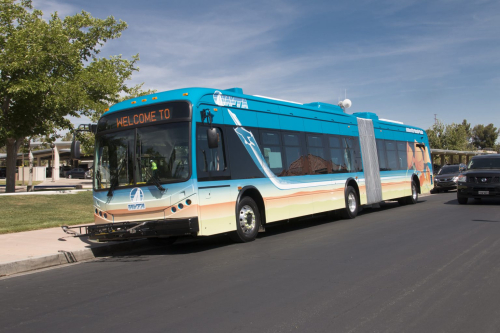 AVTA, which serves northern Los Angeles County and portions of southern Kern County, was the first transit agency in North America to make the decision to go 100% battery-electric. Since then, AVTA has put 57 BYD zero-emission buses into revenue service.

The K7M seats 22, has a range of up to 150 miles, and can be fully charged in 2.5 to 3 hours. AVTA plans to use the nimble K7M on less-populated routes, saving its larger 40- and 60-foot buses for higher volume routes.

AVTA is buying the K7Ms through a State of Georgia statewide contract, which benefits local governments and transit agencies through the convenience and competitive pricing of pre-established contracts. BYD has also been selected as a vendor for transit buses and motor coaches in statewide contracts for California and New Mexico.

BYD’s 60-foot articulated transit bus is suited for high-volume passenger operations, providing service with less noise and vibration. Depending on the configuration, the bus can accommodate up to 89 passengers. It has a range of up to 220 miles and can be fully charged in three to four hours.

The K11Ms were originally to go to the Albuquerque, but will now be operating on the streets of the Antelope Valley.

There are more than 1,000 BYD battery-electric buses built or ordered for US customers. Every American-built zero-emission BYD bus eliminates approximately 1,690 tons of CO2 over its 12-year lifespan, according to the US Department of Transportation.