Classification society ClassNK has issued an Approval in Principle (AiP) to Kawasaki Heavy Industries for the design of a cargo containment system (CCS) of the world’s largest capacity (40,000 m3 class per tank) developed for use on a large liquefied hydrogen carrier. 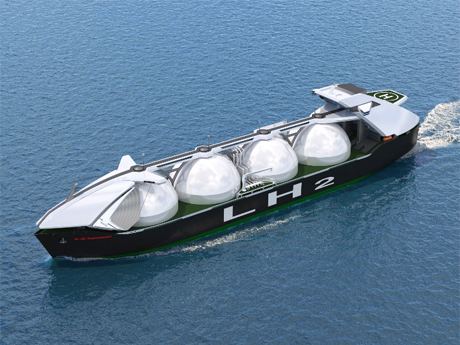 The CCS for which the AiP was obtained is designed to contain cryogenic liquefied hydrogen, reduced to a temperature of -253 °C and one eight-hundredth its initial volume, for shipping by sea in large amounts. This containment system has the largest capacity of its kind worldwide used in liquefied hydrogen marine transport.

The CCS was developed using design, construction and safety technologies fostered through building of the Suiso Frontier, a pioneering liquefied hydrogen carrier built by Kawasaki that offers a 1,250 m3 carrying capacity. In addition, the CCS utilizes a new type of insulation structure.

The main features of the CCS announced by Kawasaki are:

Kawasaki developed the CCS as part of a project with financial support from NEDO. The company is currently developing a large, 160,000 m3 liquefied hydrogen carrier using four CCS tanks, which is scheduled to start commercial operations by the middle of the 2020s. Amid global calls for the early achievement of carbon neutrality targets, Kawasaki is striving to achieve large-volume transport of liquefied hydrogen, for which demand is expected to grow as a clean energy source.

To contribute to the maritime transportation of hydrogen, which is anticipated to expand its use worldwide, in 2017 ClassNK published the “Guidelines for Liquefied Hydrogen Carriers” describing the safety requirements for liquified hydrogen carriers based on IMO’s Interim Recommendations for Carriage of Liquefied Hydrogen in Bulk.

ClassNK carried out the design review of the newly developed CCS for a hydrogen liquified carrier based on its Part N of Rules for the Survey and Construction of Steel Ships incorporating the IGC Code, and its guidelines incorporating the IMO’s interim recommendations. In addition, a comprehensive safety assessment of the CCS was conducted based on the HAZID risk assessment results, which has led to the issuance of the AiP.