On 7 May, Colonial Pipeline, the largest refined products pipeline in the US that delivers nearly half of the East Coast’s fuel supply, was hit by a cybebattack, and halted all pipeline operations. (Earlier post.) In an update on Sunday, the company said that its mainlines (Lines 1, 2, 3 and 4) remained offline, although some smaller lateral lines between terminals and delivery points are now operational.

The Colonial Pipeline operations team is developing a system restart plan, and will bring the full system back online when safe to do and in full compliance with the approval of all federal regulations.

Bloomberg reported that West Texas Intermediate in New York rose as much as 1%, while gasoline rose 4.2% to the highest level since May 2018 before easing back. Following the Sunday update, Bloomberg noted that a rush for replacement fuels could emerge, fuels could emerge, leading traders to source cargoes from Europe and Asia. 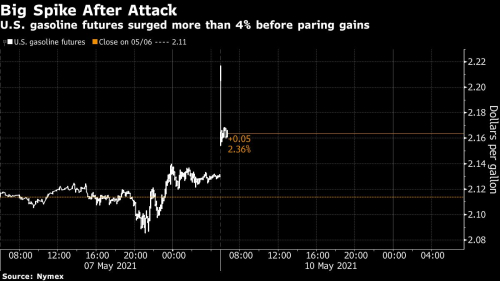 Gasoline prices were already up this year on rising demand from motorists. US refiners were increasing output for summer demand, with the biggest spike expected at the start of the Memorial Day holiday on 31 May.