Vietnam-based e-bike start-up MODMO began delivering its flagship model, Saigon+, in Europe earlier this year; MSRP is €2,499 (US$3,041). MODMO plans to bring the e-bike to the US market soon. 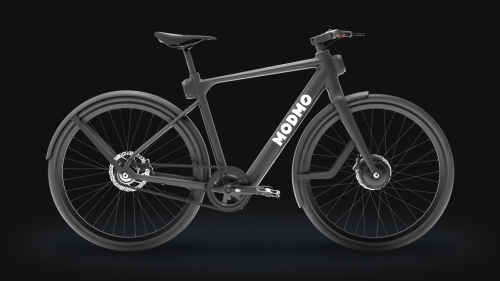 Developed in Ireland, and produced in Vietnam, MODMO was founded by 24-year-old company CEO Jack O’Sullivan. The Saigon+, named after Jack’s current home of Saigon, Vietnam, features a long-range battery hidden within its aluminum frame, and executes up to a 200km ride on a single 4-hour charge. The custom-developed battery is easily removed or charged through the on-frame charging port.

The 250W offers 5 power levels. Combined with the Enviolo Planetary Gear System, the bike provides a pedal-assisted top speed 25km ride through any terrain. The carbon-reinforced belt system will never rust and requires little to no maintenance.

Built-in GPS offers theft prevention and owner security, accessible through the MODMO app. The software is designed to set up a 5-meter perimeter between the owner’s phone and bike. If the bike is moved outside the set boundary, it will send a notification through the MODMO iOS- or Android-based app.

Bright LED lights are integrated at the front, the rear, within the MODMO proprietary handlebar ends and seatpost ensuring that the rider is clearly visible at night to both ongoing and backside traffic. Hydraulic breaks allow for a fluid slowing of speed.

The bike features an interchangeable and custom-developed front and back loading range of MOD accessories including a child seat, a basket, a pannier, wooden boxes and an insulated food delivery box. They each clip onto the bike within seconds to add functionality to the vehicle whenever needed, with no tools required.

The Saigon S is a slightly paired down version of the Saigon+. With many of the same core features, the main differences include an up to 115km pedal assistance on a single charge, and it does not include the built in GPS technology. MSRP is €1,799.