DARPA recently awarded contracts for the first phase of the Demonstration Rocket for Agile Cislunar Operations (DRACO) program. The goal of the DRACO program is to demonstrate a nuclear thermal propulsion (NTP) system above low Earth orbit in 2025. The three prime contractors are General Atomics, Blue Origin, and Lockheed Martin. 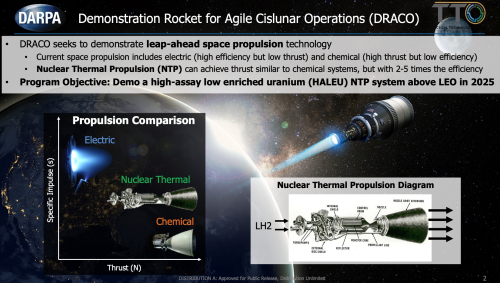 Rapid maneuver is a core tenet of modern Department of Defense (DoD) operations on land, at sea, and in the air. However, rapid maneuver in the space domain has traditionally been challenging because current electric and chemical space propulsion systems have drawbacks in thrust-to-weight and propellent efficiency, respectively.

This combination would give a DRACO spacecraft greater agility to implement DoD’s core tenet of rapid maneuver in cislunar space (between the Earth and moon).

The performer teams have demonstrated capabilities to develop and deploy advanced reactor, propulsion, and spacecraft systems. The NTP technology we seek to develop and demonstrate under the DRACO program aims to be foundational to future operations in space.

Phase 1 of the program will last 18 months and consist of two tracks. Track A will entail the preliminary design of an NTP reactor and propulsion subsystem concept. Track B will produce an Operational System (OS) spacecraft concept to meet mission objectives and design a Demonstration System (DS) spacecraft concept. The DS will be traceable to the OS concept, but specifically focus on demonstrating an NTP propulsion subsystem.

This first phase of the DRACO program is a risk reduction effort that will enable us to sprint toward an on-orbit demonstration in later phases.

DRACO’s Phase 1 is expected to inform follow-on phases for detailed design, fabrication, and on-orbit demonstration. Any follow-on phases will be solicited by DARPA in a future announcement.