Mercedes-Benz has begun production of the EQS electric sedan at Factory 56 in the Mercedes-Benz Sindelfingen plant. The EQS is integrated into ongoing series production at the site as the first all-electric model. 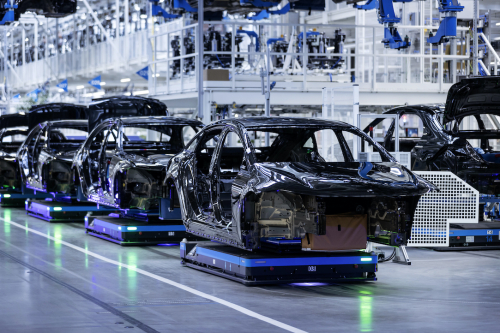 The Mercedes-Benz S-Class sedan, the long-wheelbase version and the Mercedes-Maybach S-Class are already rolling off the production line at Factory 56.

The company says that EQS production in Factory 56 exemplifies sustainable and CO2-neutral vehicle manufacturing at Mercedes-Benz. Numerous measures that enhance environmental protection and resource conservation characterize the factory. As just one example, photovoltaic systems on the roof of the hall cover yearly around 30% of the electricity demand.

Due to maximum flexibility, the assembly of different models and drive types on one line is possible. The processes and equipment in the production hall of Factory 56 can therefore be adapted to the requirements of the EQS electric model.

This becomes clear, for example, in the “Fullflex Marriage”, whereby the vehicle body is connected to the drive system. The marriage in Factory 56 consists of several modular stations. Different powertrain variants can thus be connected to the respective vehicle bodies on the same line. 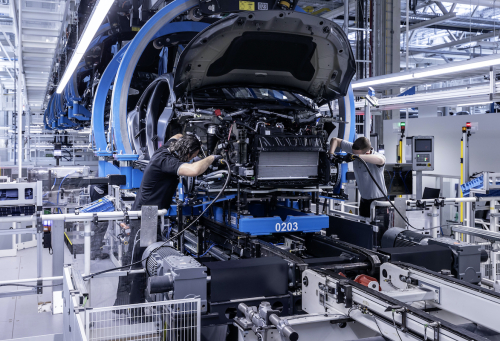 Efficiency in production has also been significantly increased—partly due to the high level of digitalization. EQS production and development follow a new concept: product development and production of Mercedes-Benz are becoming even more digital and smarter. The MO360 digital ecosystem forms the basis for production. The entire digitalization strategy with its focus on people aims to provide the best possible support for the more than 1500 employees at Factory 56 in their daily work. Having the right qualifications plays an important role, especially when handling high-voltage technology. The employees in vehicle production therefore received intense training.

The future of our global Mercedes-Benz production network begins with EQS production in Factory 56: this future is CO2-neutral, sustainable, fully digitalized, connected and highly flexible. The start of production of the EQS is a highlight in our unprecedented electric vehicle initiative in the production area. In 2022, a total of eight Mercedes-EQ electric vehicles will be produced at seven locations on three continents.

—Jörg Burzer, Member of the Board of Management of Mercedes-Benz AG, responsible for Production and Supply Chain Management